I am a Hoosier, but I was a Boilermaker

I met with a few friends from my class trip to Hawaii for dinner and drinks last night, so I'm staying in town with a friend for the rest of the weekend and going straight from here to work Monday.


Before dinner, as a gift to my host, I bought a six pack of Three Floyds beer at Big Red Liquors. I waited in line behind a group of three college-aged kids. One of the guys got to the counter and gave the cashier his credit card. The cashier didn't do anything for a second, then said:

"I hesitated when I saw the Purdue logo on the card."

The woman in the group then said, "We're in enemy territory now."

Since 1901, the IU-Purdue men's basketball rivalry has shaped what it means to be a college basketball fan in Indiana. You can try to be neutral and say, "I root for every college team from Indiana," but chances are you're talking to another Indiana basketball fan, and they'll know you're lying. With symbols as iconic as Gene Keady's painted-on hair and Bob Knight throwing a chair, you can't help but favor one over the other. The only difference is the zealotry with which you cheer and/or jeer.

I like to call myself a special case in the matter: I was a big Purdue fan until I went to IU.

If you know me, you probably already know that my parents graduated from (and met at) Purdue. So, I have that school to thank for my existence. I repayed the favor with some pretty zealous Hoosier-bashing, which often meant screaming at the TV during a baskeball game and bringing a spare Purdue shirt to middle-school gym class for the poor Hoosier sap who forgot his. (Vindictive? Maybe. Petty? That's what middle school is all about.)

Of course, Purdue doesn't give a journalism degree (just mass communication), while IU has a full school for it. When my interests in journalism started to flower, I decided to attend The Enemy, and my parents understood the decision. I foolishly kept some Purdue shirts in my dorm room, but other than that I tried to keep my fandom low-key. (This backfired at the 2007 Old Oaken Bucket game, when I openly cheered for each Purdue touchdown. I left before the game ended; it was very close, so I figured that neither result would be pretty for me.)

As I continued at IU, though, I began to catch the Hoosier bug, even as IU suffered through the shock waves of Kelvin Sampson's recruiting violations. By the time I was an IDS beat photographer for men's basketball, I was a full-fledged Hoosier fan. I had moved from rooting against IU to rooting for both equally to rooting for IU. I still can't bring myself to root against Purdue or equal the vitriol of many Hoosier fans, which makes me either a respectable Indiana basketball fan or a wishy-washy commie flip-flopper. (I also couldn't show it, since I was, y'know, reporting.)

Enough about me, though. This year, IU is returning to basketball greatness, and Purdue, while not awesome, could still make the NCAA tournament. I'll be watching tonight's game, which should be a good one, in the best place outside of Assembly Hall: any Bloomington sports bar. Probably Nick's. 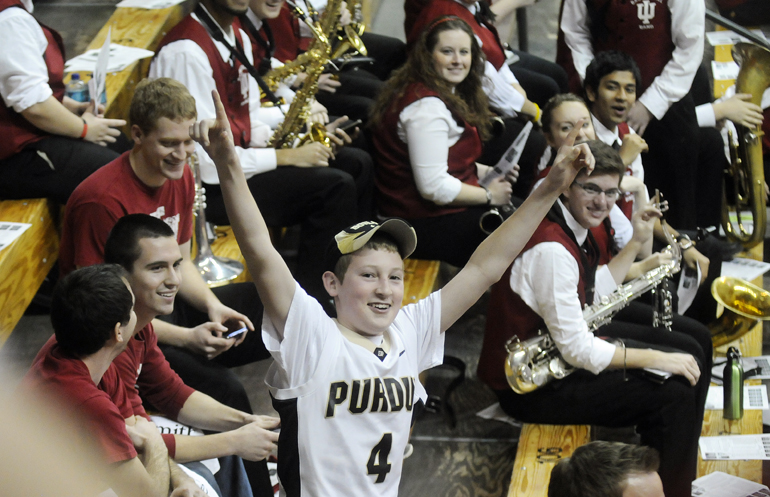 From the IU-Purdue basketball game on Feb. 23, 2011 in Bloomington. I never went to an IU-Purdue basketball game when I was younger, but if I had, I probably would have been this kid.
THINGS WE SAID TODAY Sports | IU | Personal
Tweet
HTML Comment Box is loading comments...
Comments
Next
Previous entry: Dumpster diving through the archives: Internal frame
Next entry: woohoo its PHP OMG im a hackzorzasaurus