I started what will likely be a six-week stint at the Journal & Courier in Lafayette on March 4, filling in for an editor on medical leave. My life hasn't been so full of journalism since the IDS, and I love it. There are a lot of stories to tell (like getting on the AP wire and breaking my camera on the same day), but I absolutely have to tell you one of them.

My first assignment was to cover a gold and electronics buy-back event at the Comfort Inn. It was very low-key, but one promoter was insistent that I get photos of every type of item bought at the event. This man, known around the place as Jeff the Coin Guy, showed me some of the gold they had received earlier in the day (photo 9). After the photo, he hurried off to do a live radio spot, so I asked another organizer what his full name was. (You know, for the caption.) The organizer said, without trouble, that his name was Jeff Parsons.

I came back to the newsroom and submitted the photos. The next day, the reporter on the story, Hayleigh Colombo, came over to the photo desk and asked me about the photos I'd taken. Specifically, she was confused about Jeff the Coin Guy. She had been told that his last name was Allen, which didn't jive with my Parsons. She checked it out, and she found Illinois documents showing that a Jeffrey A. Parsons owed $500 million to various creditors. Five hundred million dollars! And the photos of Jeff the Coin Guy attached to Illinois media stories matched our guy.

So, I would like to take some appropriate credit for copy of story here. I don't know what would have happened if I had asked Jeff himself what his name was.

Anyway, this was an exciting two weeks. As a token of my excitement, I have here a batch of photos from those first two weeks (March 4 to March 17). Going forward, I'll probably put up an entry every Sunday night while I'm here, starting with photos from my third week this Sunday.

While you're here, I should tell you that I have a series on Operation Walk in Guatemala running on the Indianapolis Monthly's Circle Citizen blog. So far, I have three entries there, with the fourth going up some time today. 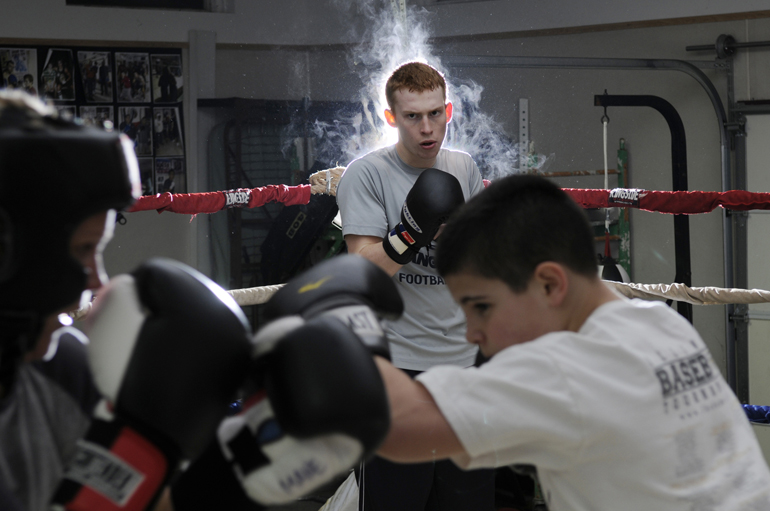 Lafayette Boxing Club's Tate Sturgeon watches as Kate Mane and Kyle Siple trade light jabs during a workout Tuesday, March 5, 2013, at the club building in Lafayette. Sturgeon and Mane, along with Luis Pena, Conan Hutchison and other boxers, will compete at the Indiana Golden Gloves tournament on March 21 in Indianapolis. Alex Farris

Robby Fortwendel, 18, looks at the damage to his truck after an accident Tuesday, March 12, 2013, on South Creasy Lane in Lafayette. Fortwendel and a Chrysler PT Cruiser collided in front of Camille’s Café, closing Creasy from the Pavilions to Discount Tire for about an hour. Alex Farris 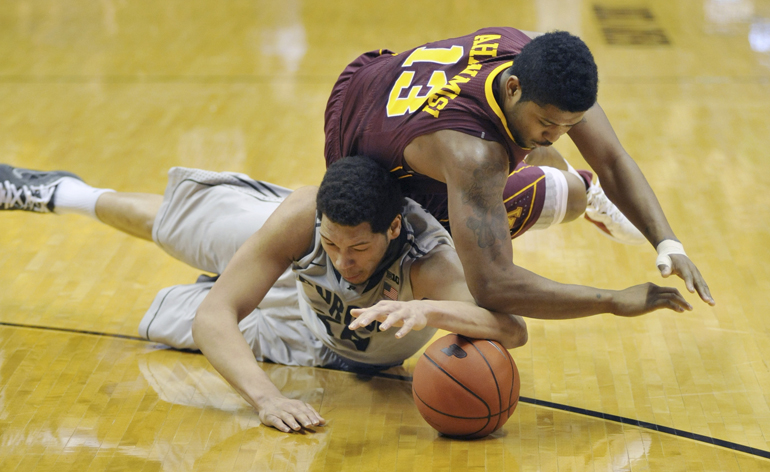 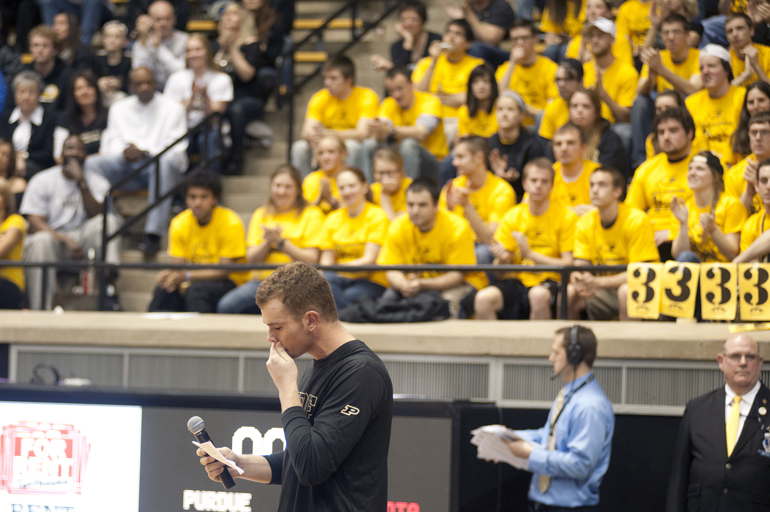 Purdue senior D.J. Byrd collects his thoughts before continuing with his Senior Day speech after an 89-73 victory over Minnesota on Sat., March 9, 2013, at Mackey Arena in West Lafayette. Alex Farris

Dieticians and children make a mushroom out of a parachute during the last night of a Families United for Kids' Health program Thurs., March 7, 2013, at Franciscan St. Elizabeth Hospital in Lafayette. Alex Farris 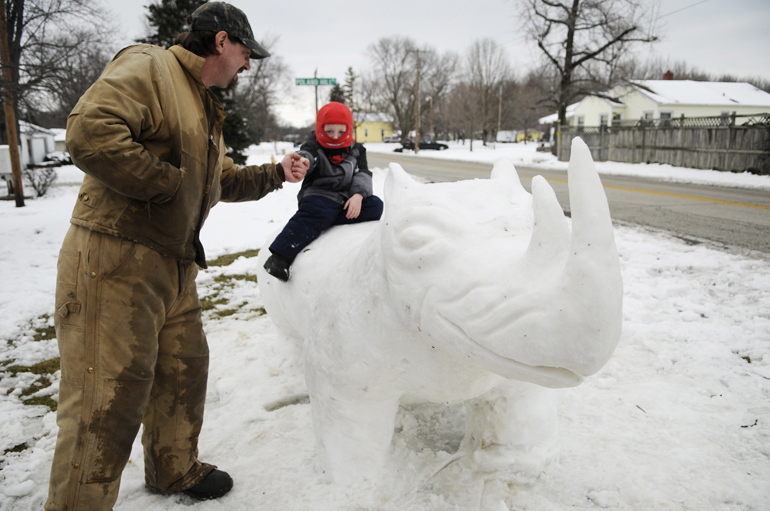 Chip Stoops gives a high-five to his son Hunter as Hunter sits on a rhinoceros snow sculpture Thurs., March 7, 2013, off Poland Hill Road in Lafayette. Stoops said he and Hunter built it together and that Hunter also wanted to make an antelope. Alex Farris 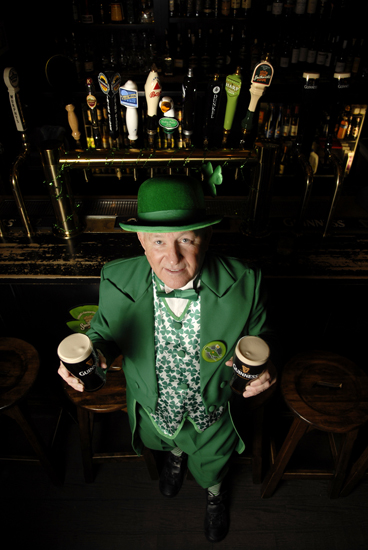 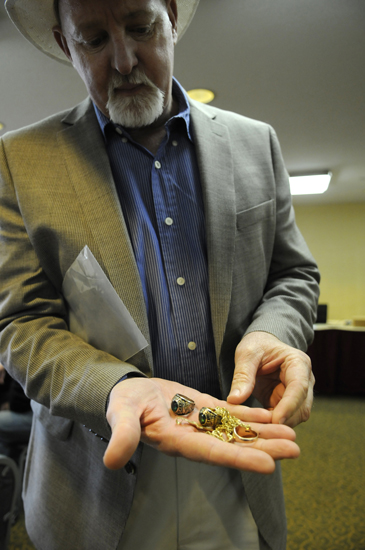 Jeffrey A. Parsons, known as "Jeff the Coin Guy," shows off jewelry sold during the Electronic BuyBack Event on Monday, March 4, 2013, at the Comfort Inn in Lafayette. Parsons owes up to $500 million to sellers whose checks didn't clear and in other debts incurred at trade shows in Illinois. Alex Farris 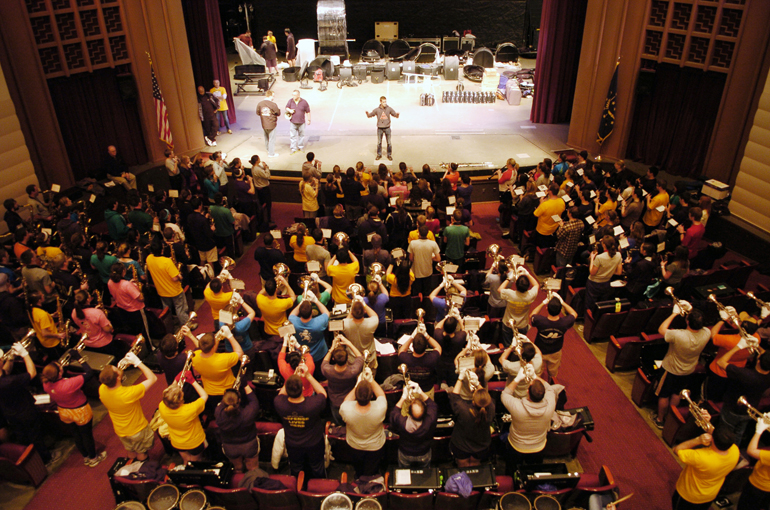 Retired Marine Staff Sgt. Eric Alva shows his prosthetic leg to students and guests Tuesday, March 5, 2013, at the Cordova Recreational Sports Center at Purdue University in West Lafayette. Alva, who is gay and was the first injury of the Iraq War, advocated for the repeal of the U.S. military's Don't Ask Don't Tell policy. Alex Farris 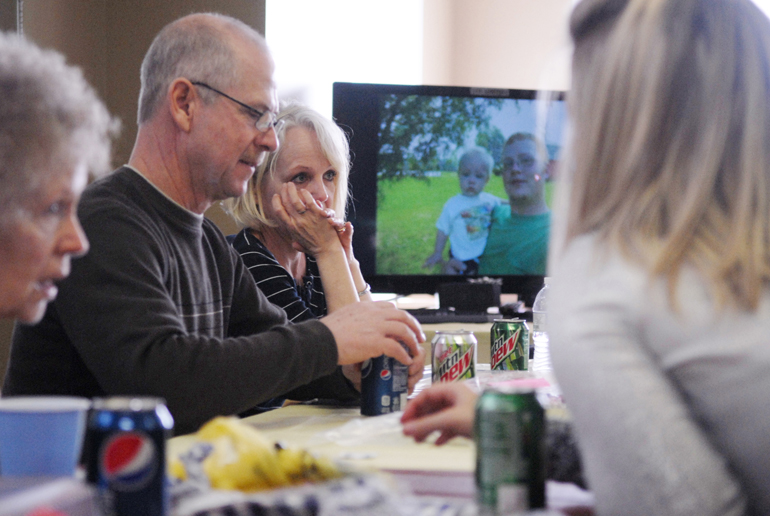 Cindy Ward (center) wipes away tears after looking at photos and videos of her nephew, Lance Ward, and his children during a chili-dinner benefit on Saturday, March 16, 2013, at West Mill Social Hall in Attica. The benefit supported Kelli Ward, Lance's wife, who was not at home during a house fire that killed her husband and children, ages three and 18 months, on Feb. 26. Alex Farris 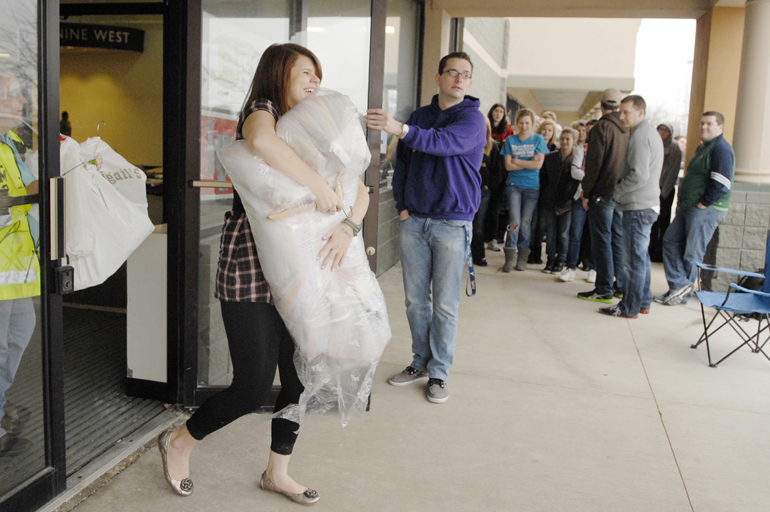