Last night, I delivered the photos and video of last weekend's wedding to the Cariaso household. Sophia, the mother of two friends in my high-school class and the bride in that wedding, thanked me and invited me in so we could watch the video and flip through the photos together with the rest of the family. I stayed there for four hours because, well, we're all good friends.


Despite that friendship, I never really knew the story of their family while I was in high school with J.D. and Denice. Denice, their eldest daughter, set me straight during the reception on Saturday. J.D., Denice, and their father, Edgar, moved to the U.S. from the Philippines in 1997, and the rest of the family (Sophia and kids Daniel, David, and Angel) was assembled in the next five years. By the time I started high school in 2003, all of them were here, so I thought they were just a family made here that maintained its strong Filipino roots (and cooked great Filipino food!). Hearing their story during the wedding Mass's homily, how they met in their childhood neighborhood and fulfilled their Catholic marriage obligations (especially the children part) even before they were officially married in the Church, provided an even more awesome story than the one I already knew.

As grandmother and granddaughter, husband and wife, watched the video and laughed at dance photos, I couldn't help but smile. I've known this family for a long time, but I was thankful to be a major part of the culmination of a long and happy life together, one that promises to be even longer and happier now. All weekend, and last night, every time Sophia and Edgar said, "Thank you," I made sure to say it back to them. 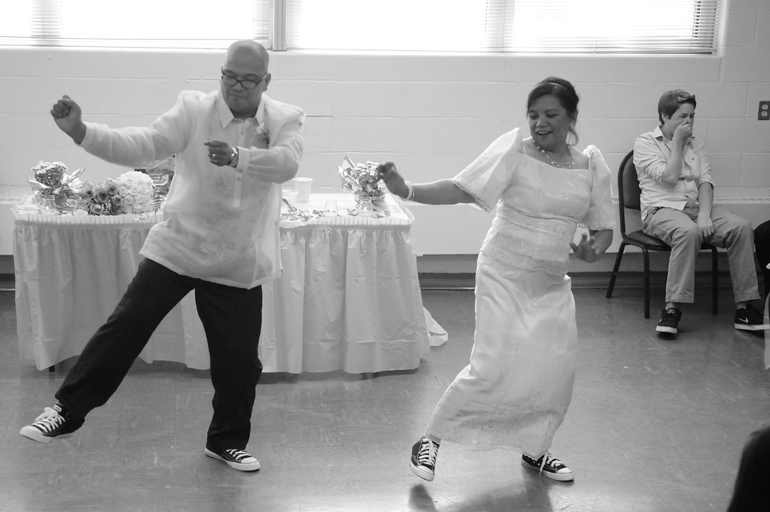 Edgar and Sophia Cariaso dance to Soulja Boy's "Crank That" during a medley of choreographed songs at their wedding reception July 7, 2012, at St. Gabriel Catholic Church in Indianapolis.

It was hard to ignore the 100-degree heat on Saturday, but the bride, groom, and their party in the wedding I shot that day made it a lot easier. Katie Peck, a former teacher at my old high school, married Matt Hilton, a teacher at another Indianapolis high school, at St. Joan of Arc Church this weekend on a day filled with controlled chaos and, as it is with any good reception, a lot of dancing. While making sure I called my old teachers by their first names (it's hard to break that habit!), I took over 1,900 pictures, averaging about 150 frames an hour. Big shout-outs go to the Athenaeum downtown for the sweet digs at the reception, and to the people who filled that hall with good dance music, JK Mobile DJs. You should check them out if you're contemplating a reception, company shindig, or other rambunctious get-together.

I hope every wedding I shoot is this fun. :D 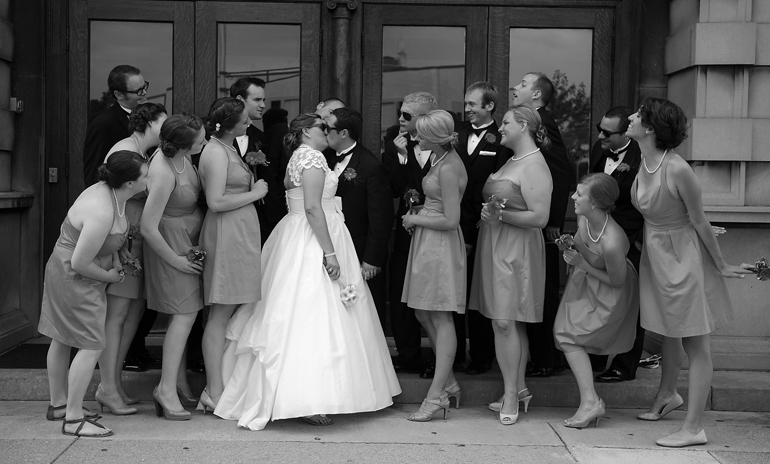 Katie and Matt Hilton kiss as their wedding party looks at them before the wedding reception June 30, 2012, outside the Athenaeum in Indianapolis.

Marines put on a good wedding

My cousin married Steve last May before he deployed to Afghanistan, but they made plans for a "proper" wedding at the Marine Corps chapel at Quantico once he came back.

Steve and Amy Adair kiss in front of a tunnel of Marine Corps members and swords after their wedding Mar. 24 at the Marine Corps base in Quantico, Va.