True A tree lays across Hunter Avenue near Fess Street. Because the tree did not break through the home or any power lines, the city workers decided to wait until morning to move it so they could take care of other damage. Alex Farris
Bloomington Storms, 5/25-26/11 | Alex Farris Photo Blog
Home
Previous
Archive
TAGS
News
Bloomington
Indiana Daily Student

I was working on the final draft and multimedia element of my Hawaii story in the Herman B Wells Library on Wednesday evening. I knew storms were a'brewin', so I brought my camera with me.


Sure enough, at about 10:15 p.m. the auditor at the library, Matt Duff, tells everybody that they should go down to the basement. Five minutes later, the lobby doors shook and wind beat against the westside windows. There were frantic saves of projects, ejections of hard drives, some stalling and a stupid question with a blunt response, but we eventually left the window-filled Information Commons and headed to the basement.

For the next four hours, I felt journalism in me. I interviewed people in the basement, I heard where damage had been reported and I went to take photos of that damage. Fortunately, after I walked a ways down Seventh Street, a car pulled up and were willing to drive me home. After that, I drove my own car to other damage sites and got home at about 2:15 a.m., thanking the cleaning crews wherever I went. The result appears below.

(My former IDS colleague, Peter Stevenson, had a wholly different, and scarier, experience with the evening's storm. Check it out.)

Update
Another IDS colleague, Ryan Dorgan, made it to Sam Mason Properties north of town, arguably the place hit worst by the storm. His poignant post and photos of the mobile home park are here.

Also, I wrote a story for the IDS to go with some of the photos. This is all going according to plan. 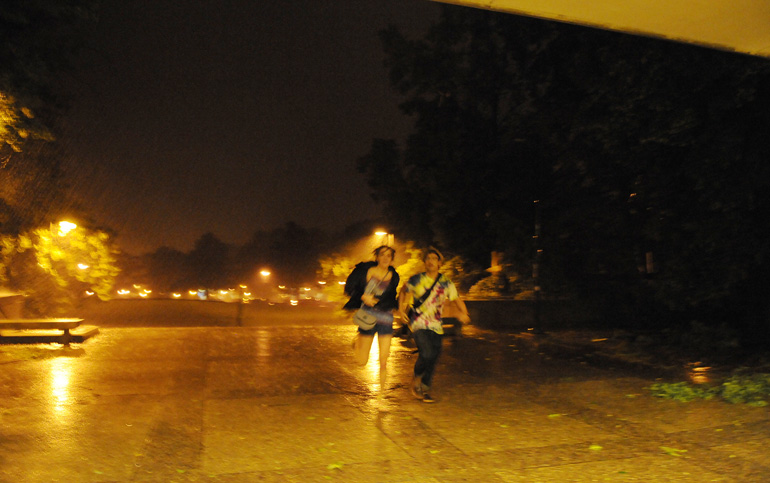 Rising junior Tara Nei and local photographer Nattapong "Nut" Tassawong run toward the doors to get out of the rain Wednesday on the south patio of the Herman B Wells Library in Bloomington, Ind. Tassawong said he saw a large piece of metal rolling down Jordan Avenue near 10th Street while he was driving. "I ran a red just to get past it," he said. Alex Farris 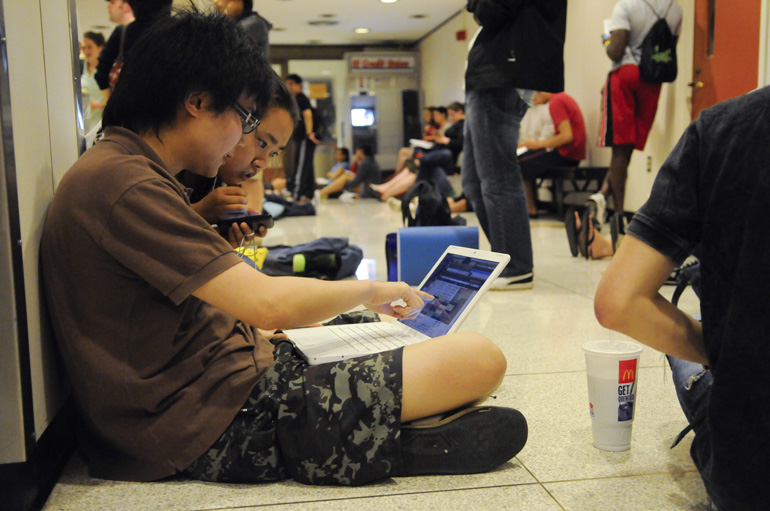 First-year graduate students Jie Ma and Kalok Chu watch radar maps on a laptop in the basement of the Wells Library. The two were studying for a qualifying exam, to be taken Friday, when the storms started. Alex Farris 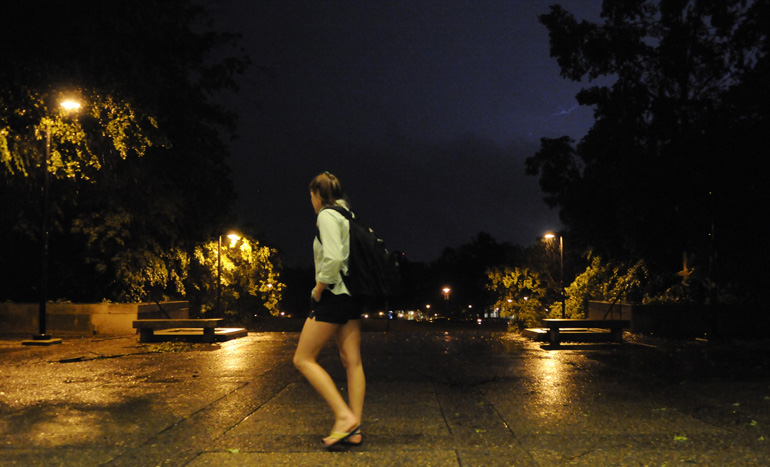 Rising senior Kirsten Powell talks on the phone while the storm dies down on the south patio of the Wells Library. The worst part of the storm lasted for about half an hour and ended at about 11 a.m. Alex Farris 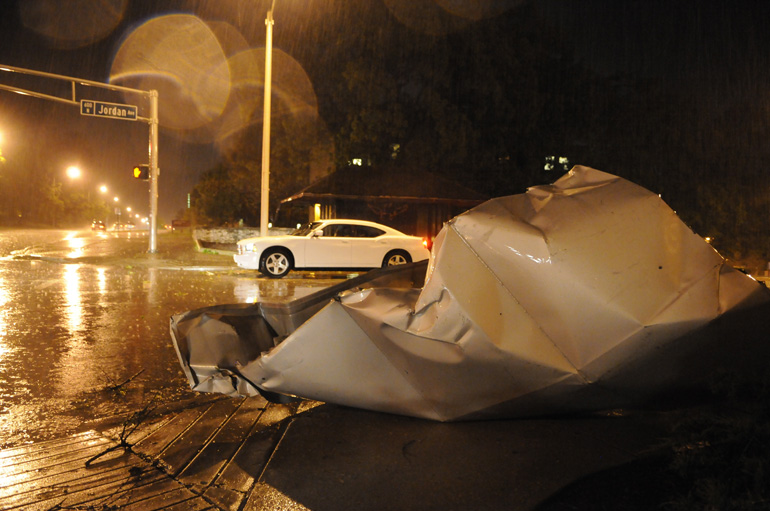 A large piece of metal lies on the sidewalk at the corner of 10th Street and Jordan Avenue. Workers at the Wells Library said they believed the metal came from the top of the library. Alex Farris 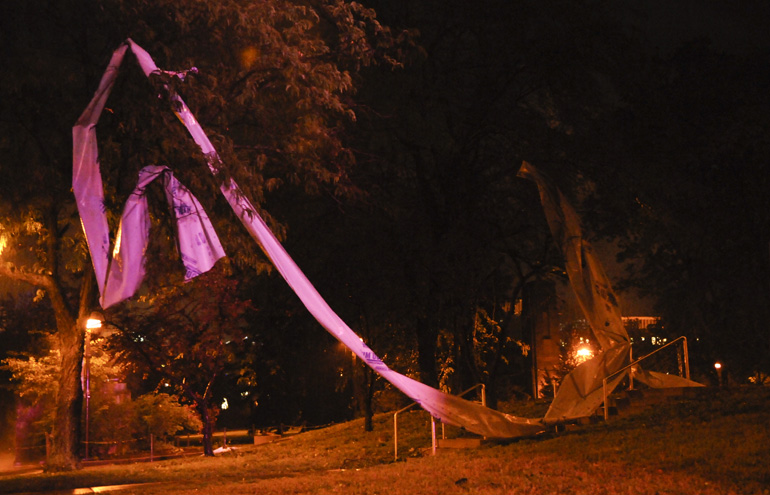 A banner hangs from trees between the IU Art Museum and the School of Health, Physical Education and Recreation. Alex Farris 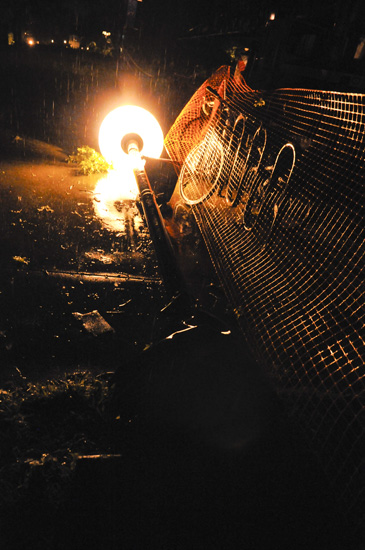 A light pole lays on the ground in front of the School of Health, Physical Education and Recreation just before midnight. Alex Farris 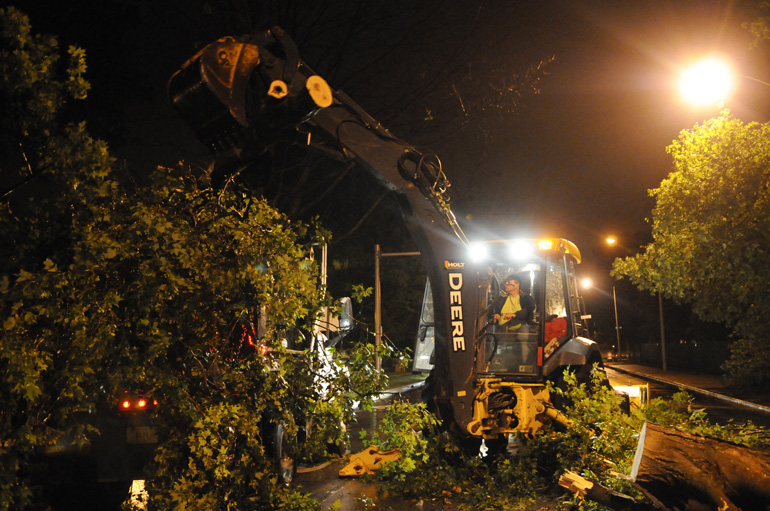 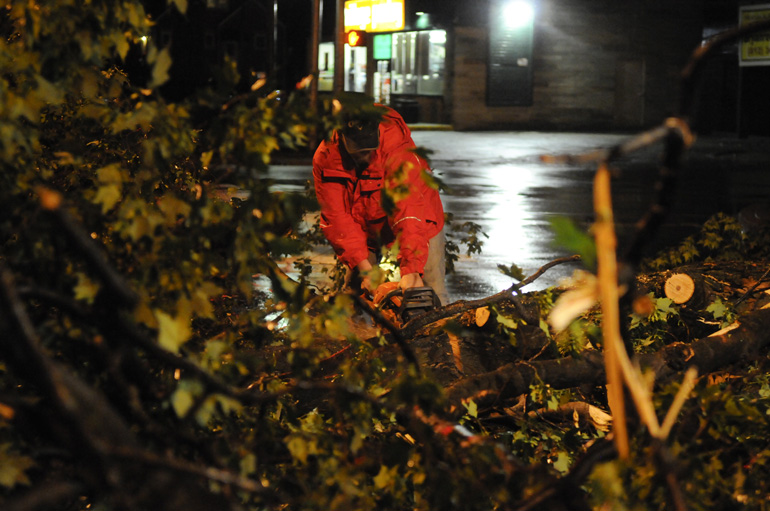 IU-Bloomington Campus Division worker Joe Jones power-saws through the trunk of a tree to make it easier to move early Thursday morning at Third Street and Jordan Avenue. Jones said he and Humphrey had finished cleaning up the intersection after Monday's storms at 4 p.m. Wednesday and came back at 10:30 to clean more damage. Alex Farris 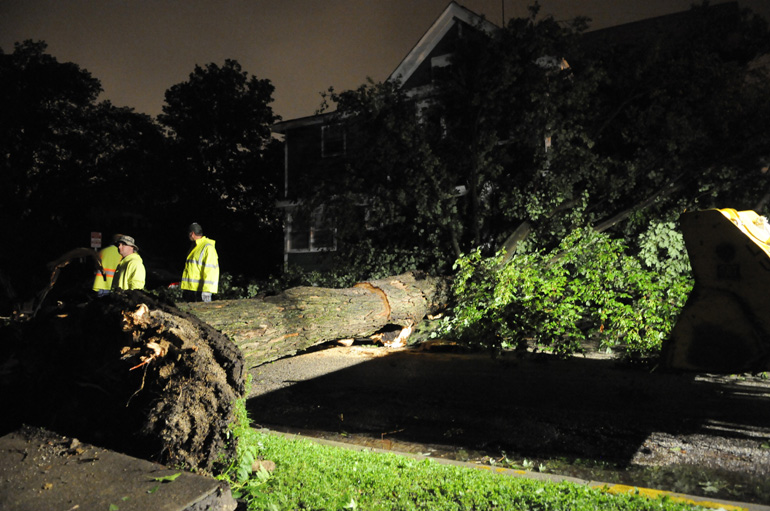 A tree lays across Hunter Avenue near Fess Street. Because the tree did not break through the home or any power lines, the city workers decided to wait until morning to move it so they could take care of other damage. Alex Farris 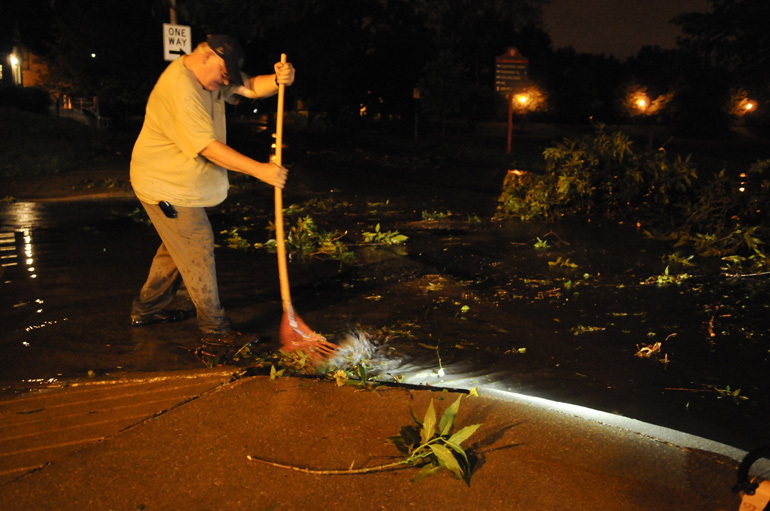 IU-Bloomington Campus Division worker Danny McCammon rakes leaves out of a drain at the corner of Sixth Street and Indiana Avenue. His co-worker, Mike Montgomery, said they were cleaning damage from Monday's storm on Wednesday, then came back to work at 12:30 a.m. early Thursday morning. "We're not even caught up with the first one," he said. Alex Farris 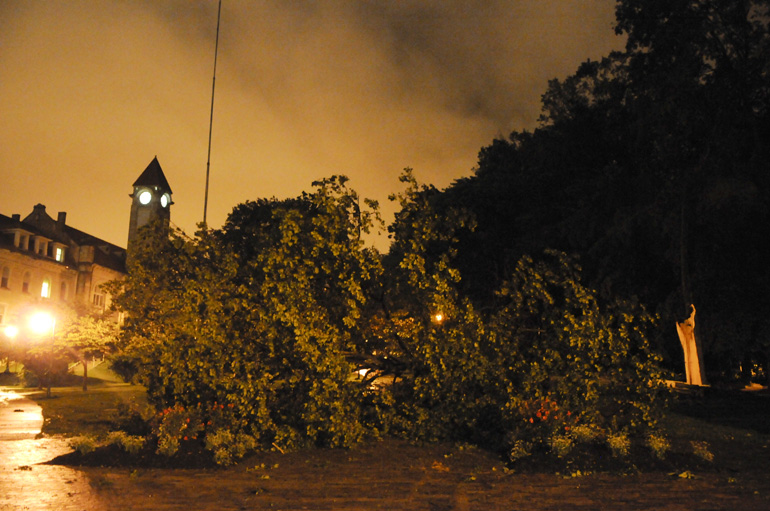