or Light pollution: a bane of my existence

I'll have an entry for my fourth week at the Journal & Courier up tomorrow, but before I put that up, I have another story to tell you.


Last night, I got the urge to drive an hour out of Lafayette and do some stargazing. Even before I started my photo gig, I mapped out a place and a time to go out into the country and ponder the immensity of the universe. I found, on Google Maps, a place south of Brook, Ind., that I had thought would be relatively dark. There, I would get freaked out about how many stars were above me, get used to them, and take some cool photos.

There was one problem: Despite how out-of-the-way my spot was, I couldn't get away from the light pollution. Indiana is not the Boundary Waters: There are some aspects of civilization, whether cities or one-traffic-light towns or large farms, everywhere you go. It resulted in a yellow haze near the horizon as I looked in almost every direction.

I ended up having a second problem, though. The moon gives off a lot of sun-reflected light, which would end up being another source of light pollution once it rose above the horizon. That didn't happen until about midnight, but that event turned out to be the most horrifying part of the evening. For objects in the sky, and for the sky itself, certain wavelengths of light reach your eye and some don't depending on what's in the sky and where that something is, resulting in the traditional blue sky and the redness of sunrises and sunsets. The same effects, known as Rayleigh scattering, apply to the moon, and when its waning-gibbous self peaked over the horizon, it was a strong scarlet red (like this, from another photographer). I didn't expect it, so when I saw it, my human instincts told me, "THERE'S A BIG RED THING LOOKING AT YOU! RUN AWAY!" My fight-or-flight response chose flight, meaning that in less than a second, I lunged into my car and closed the door. (Please take a moment to imagine me doing that. It makes even me laugh.) I then spent five minutes talking to the moon (to myself, really), saying:

"You are just the moon. You are red because you're appearing close to the horizon. You are not an omen. You are a perfectly natural thing. You are nothing to be scared of. I know all this already. I only reacted this way because it's safer for my body to assume that a benign thing is a bad thing than it is to assume that a bad thing is a benign thing. I will breathe normally, I will get out of the car, and I will keep taking pictures."

...Even though I told myself all that, and even though I did get out of the car, I felt like I had to keep one eye on the moon the whole time. Natural reactions take so long to dissipate.

Anyway, below is the best photo I got from the night. I left the shutter open for 175 seconds, enough for you to be able to tell that the stars seem to move around Polaris. I would have left the shutter open for longer, resulting in longer star trails, but that damn light pollution ruined all my fun. After this, I had to pack it up, because the moon was rising (and fortunately, becoming less red as it did so!). Depending on the weather, I might try a different place next weekend.

Update 2014.07.16: After finding this entry again, I felt I had to add something. I never made it out to another place in the boondocks near Lafayette during my time at the Journal & Courier, but I did do something similar at home in May of 2014, as part of the new Camelopardalids meteor shower. The star trails turned out 10,000% better. 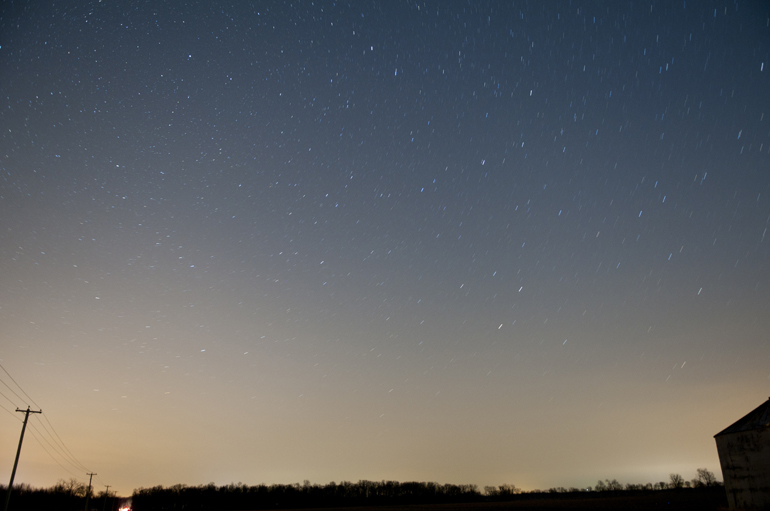