This is the photograph I didn't take.

I did some Stumbling recently, and I came across this site called Unphotographable. It's a blog, of sorts, "a place to gather the moments when I didn't click the shutter," as writer and photographer Michael David Murphy says. Non-photos of dueling shirts and a shady Bible reminded me of all the times I never clicked the shutter, because either I didn't have my camera or I didn't feel like it at the time. To be sure, there are moments in which it is best to simply live, like on a night out with friends in a cave bar in Madrid or the ninth inning of your friend's high school baseball state championship game. In a more photo-friendly time, though, inaction in the face of a beautiful scene cuts you deep.


I came across this situation today. I was on my way from my research job to a photo assignment for The Indianapolis Star, and in Avon I got stopped at a railroad crossing. A kid on a bike was behind me, waiting for the train to pass. He must have been 15 or 16, not much older, and he looked like he couldn't give a damn. He certainly didn't care about the line of cars in front of him, because he got into the other lane (no oncoming traffic, of course) and skipped to the front of us car-bound travelers. He and his bike, hardly anything to write home about, stood like a defiant mouse against the industrious rumble of the train and its rusted, graffitied cargo cars. Three modes of transportation, one snubbing its nose as it rolled along, another standing tall as it gloried in its position ahead of the last, newest mode as if to say, "Screw you and your engines."

All of that went through my head as I waited for the train to pass, and I dearly wanted to convey all of it in a photo. Alas, even though I had all my equipment with me, it was all in my trunk. I would have had to get out of my car, switch lenses to my 80-200mm, stand next to my car, and pretend to be oblivious to the drivers thinking to themselves, "What the hell is this creep up to?" I imagine it's hard for someone, one who is not trained to leave a conversation at a photogenic drop of a hat, to see beyond the yokel with the way-too-fancy camera and applaud that same yokel's dedication to getting a good photo. I imagine; maybe they would have seen it my way in the first place, and I'm just making assumptions.

Either way, I didn't go into my trunk, and by the time I had gotten the gumption to say to myself, "Forget the haters, I'm getting the photo," the last car was in sight. I had missed the moment. I spent the last moments with my car in Park telling myself it was okay. "The photo wouldn't have been THAT awesome," I thought. "You didn't NEED the photo. Would it really have been worth turning off the car, cursing your defective trunk-open button, switching lenses, and standing in the middle of the road?" Of course, it wasn't a life-or-death, or rude-or-not, or legal-or-illegal decision. Thus, my self-assurances rang hollow. Of course, it would have been worth it.

I did have my iPhone handy, so before the train passed I caught some proof for my future self, a self who most assuredly will suffer the same bout of second-guessing many times. Hopefully, this memory of what was lost (or at least what wasn't gained) will nudge me to take the shot. 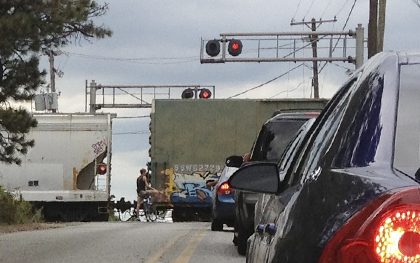 This is the scene through my iPhone 4S, cropped so you can tell what it is. Imagine what a statement of individualism, spirit, and youth it could have been if I had gone into my trunk and used my long lens.
HTML Comment Box is loading comments...
Shorts