Warning: There's some strong language in here. It definitely does not come from the account run by a government agency, though, just the one from the fake government position-holder.


When I'm on Twitter (which, admittedly, isn't as much as most of the people I follow), I have tweets from over 200 accounts blazing through my news feed. Most don't get a second glance, but there's one account I recently started following that catches my eye every time: the Mars Curiosity rover.

The Curiosity rover, the SUV-sized beast of NASA's Mars Science Laboratory, landed on Mars on the early morning (EDT) of Aug. 6, watched by over 1,000 people in Times Square and by so many others on NASA's live feed. The smoothness and immersive nature of the feed prompted The Guardian's Dan Gillmor to write, "I didn't much care that the news organizations had so little interest, because [NASA] was doing such a good job on its own." All of that coverage included the tweets NASA sent out through its main feed, the Jet Propulsion Laboratory, and individual missions, and NASA has gotten multiple accolades for its social media work, of which @MarsCuriosity is now a large part. 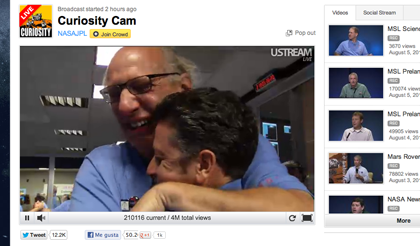 Screen grab of celebrations I uploaded to Twitpic. Seriously, they're really, really excited.

@MarsCuriosity is an anthropomorphic account of the rover's doings, full of music lyrics, frickin' laser beams attached to its head, and, most of all, interaction with other accounts. For example:

This is only one way to do social media right, however.

There wasn't much of that congeniality in another Twitter account that was awesome for completely different reasons. Here's a typical interaction:

This tweet came near the end of the run of @MayorEmanuel, a spoof of President Obama's former chief of staff Rahm Emanuel, written as he campaigned (successfully) for mayor of Chicago. Sure, there's interaction with real-life events, just like with @MarsCuriosity, and they both share distinctions as seminal cultural events in the life of Twitter, but that's where the similarities end. @MayorEmanuel uses (or used) coffee, heavy use of the f-word, 80s cultural references, unabashed pride in the city of Chicago, and the multiverse to build a story. There was no reporting of facts, although it did often rely on news reports of what Rahm was doing at that moment; instead, there were Carl the Intern and Quaxelrod, dreams of climbing a tower of dibs chairs, and all the other story elements that a live real-world telling of events can't use. At the same time, it wasn't a story in the normal sense, but rather something uniquely digital, with self-contained quips that weaved together in response to the real world and readers' reactions.

There is one more similarity between the two: On multiple occasions, I have spent too much time reading both of their feeds. I read through the entire @MayorEmanuel feed during spring break 2011, and I enjoyed the story so much I (somewhat ludicrously, for a free product) bought the book. @MarsCuriosity has provoked similar reactions, although of a different kind (clicking through ALL THE LINKS instead of reading a linear story).

Both accounts, despite their differences, elevate Twitter above normal conversation and the unfortunate (but unavoidable) lower impulses of humanity. They allow the site to show its sublimity, either as a shared experience of the highest reaches of science or as a fount of a participatory literary epic. They are both amazing. Just don't show @MayorEmanuel to your kids. They might not get the references to Sweetness.