That one time at Christmas with a recorder

Okay, so when I said, "There's a lot of science behind this," I had NO IDEA how much science there was behind this.

Shortly after I wrote the starting post for this series last week, I did some background research on (where else?) Wikipedia. I now have these bookmarks on my iPhone: 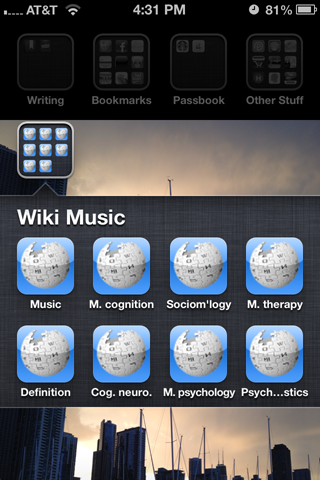 I'm sure I'll pick up even more as I go along. (For example, I hadn't even touched basic music theory yet.) The point is, there is way too much science behind music to consider it in large chunks, or even small chunks. The brain can only try to understand so many new things at one time, so I'd rather not flood myself (and you!) with so much concentrated knowledge.

As such, in each post I'll consider one (very small) concept at a time, if any. I would rather consider all aspects at once, for the simple fact that everything about music interacts with everything else. But that's too much to hold in one's head, let alone write about with any understanding. (Now I know why medicine has so many sub-subspecialties, like aerospace medicine and otorhinolaryngology.) Plus, I want the larger focus of each post to be on my reactions to songs, whether I can explain those reactions with science or not. There's no guarantee I'll be able to hold the science to a healthy minimum, but I'll try!

So, let's get started, shall we?

I didn't learn how to play much music when I was younger. My friend Dave played the piano pretty well in elementary school, and I went over to his house a lot and just listened to him play songs like "Far From Over." (Imagine my surprise when I found out, a year and a half ago, that what I heard only as a piano piece, and thus thought was semi-classical, was an 80s pop song! ...This might get its own post some day.) I liked hearing him play, but I could never play myself. The most he was able to teach me were two five-note diddies. One was just a warm-up that centered around the groups of three black keys, but the other... Well, we'll get to that.

Although my music-playing experience was quite limited, the vagaries of state education standards blessed me in fourth grade with a recorder. It was the color of fake ivory and, for most kids in my music class, spent a considerable amount of time inside a blue cloth sleave, never to be taken out at home or around respectable company. Not me, though! I, just as I was with every academic endeavor back then, was obsessed. While most kids were content enough with their social lives to stop paying attention in class after four-finger playing, I outpaced the lesson plans and moved quickly up to five, six, seven, eight, and maybe even all nine fingers. (The right thumb never did anything. What a slacker.)

Lemme tell ya, I was REALLY proud of myself. I had gone from somebody with not a lick of musical chops (and don't get me started on singing in church) to the kid who skipped ahead in the songbook. Music was finally catching up with multiplication tables! Unfortunately, my recorder career didn't go very far, and the experience was pretty much confined to fourth grade. The only time I can remember playing it in front of a group of people was at my dad's side of the family's Christmas celebration on New Year's Day 1999.

Fortunately, my dad had the presence of mind to tape it. Notice the excitement (or, less charitably, insistence) about playing in front of people and showing off what I can do. Notice also that my brother, similarly not inclined to good musical sense, sang with me.

Try not to let your head explode into rainbows and teddy bears.

I was a self-titled MASTER of "Jolly Old St. Nicholas" at all of 11 years old. In fact, it's the only song I could play on two instruments: the recorder, and the aforementioned piano. I can even still play the one-handed piano version, if only because, while growing up, I got bored at enough Christmas parties that had a piano nearby.

Oddly enough, this is the only "traditional" Christmas song with which I have any strong memories or emotions. The others, like "Jingle Bells," "Rudolph the Red-Nosed Reindeer," and "Noel," have been played in so many other contexts, and I've passively listened to them so many times, that they don't mean much to me. "Jolly Old St. Nicholas," however, is different. In two different ways, I've reached into the music, put a little bit of myself into it, and showed it off for people. Unlike the other songs, I actively embedded it into my head (and actively forced people around me to hear me play it). I presume it'll never leave, and even to my dying day, I'll be able to put my fingers on my hospital food tray and tap out its refrain.

That's probably a good thing. I haven't read through the whole article yet, but the review paper written by the University of Pennsylvania's Adam Croom is, I gather, a good synthesis of the effect of music on the brain. The section on music and engagement, especially, likely explains why I felt so good about being able to play "Jolly Old St. Nicholas," simple though it may be in the great pantheon of music.

I could confidently call every time I play something well, whether on a real instrument or on Rock Band, a "flow experience." I feel in control, focused, and less aware of everything else around me. Whatever I'm playing at the moment is the only thing that matters, and it feels like it just comes to me. As noted in the paper, Mozart remarked:

"When I am, as it were, completely myself, entirely alone, and of good cheer [...] my ideas flow best and most abundantly. Whence and how they come, I know not; nor can I force them."

There is another added benefit. Previous research suggests that musical engagement, such as playing the recorder, helps people separate speech from noise and make sense of all the sounds they hear. One paper specifically argued that music education could induce changes in the brains of children with language-based learning disorders that helped them improve their ability to understand language and overcome, at least in part, their disorders. Croom extends this to people without such disorders. Musical experience, and especially virtuosity, helps all people to focus, filter out distracting noise, and achieve that pleasing state of flow that Mozart treasured.

One with more musical sense than I, Michael Jackson, had this to say:

"People ask me how I make music. I tell them I just step into it. It's like stepping into a river and joining the flow. Every moment in the river has its song. So I stay in the moment and listen."

There's a flow to creating and performing music, and I'm glad that, even for less than a year, I could capture that flow myself and show it off. And to anyone who thinks getting fourth-graders to learn how to blow a few notes through a pipe is a waste of time, look what it can do for a non-musician.