After discussing how mediocre Earth is and the plausibility of life arising elsewhere, we come to the final aspect of this mini-series: How would we react if we were to discover extraterrestrial life? To answer, we should start with where we are now, and that allows me to mention a curious result of democratic society.

Last year, when the U.S. government launched the We the People online petition system, two petitions asked if the government knew about and was hiding proof of extraterrestrial life. Phil Larson from the White House Office of Science and Technology Policy wrote the response to these requests, and after discussing three ways that we are looking for space-alien life, he says:

"But that's all statistics and speculation. The fact is we have no credible evidence of extraterrestrial presence here on Earth."
I assume an earlier edit added, "Will you PLEASE stop asking us about Roswell, now?" Then again, if people still believe it after the 1994 Air Force report on Roswell, I have little hope for them.

So, the official position is this: We have not found life outside of Earth, but we're looking. This directly contradicts the language in the more popular of the two petitions, which claims that "hundreds of military and government agency witnesses" have testified to UFO sightings and other proof of extraterrestrial presence on Earth. What stuck out to me most, however, were their closing sentences:

"The people have a right to know. The people can handle the truth."

But how, exactly, would people handle the truth? What would be the effects on humanity that would result from the discovery that we are not alone? As should be expected of SETI-minded people, that answer has already been heavily speculated and researched. The most comprehensive study I've found is a literature review of the subject, published in Acta Astronautica last year. In it, the authors discuss nearly every possible result of contact with extraterrestrial intelligence, or ETI: 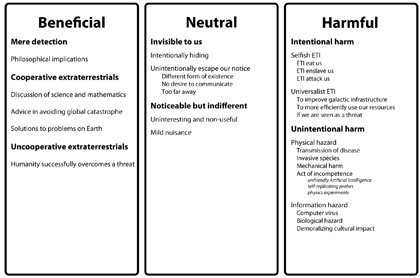 As with the Drake equation, the study suffers from lack of data: "There appears to be a tendency to jump to conclusions on a matter which remains highly uncertain and for which a broad range of outcomes are within the realm of possibility. Such narrow and hasty thought ill prepares us for actual contact." As such, the study is much, much broader than I set out to do two posts ago, so we'll just settle for the paper's first goal, that of considering the philosophical implications of ETI contact or detection.

Further down the paper, the authors discuss the possibility that the ETI may be sufficiently different from, and indifferent to, us that it wouldn't help us answer any questions or provide us with a rallying cry to unite the world against it. Yes, that's possible, but our possible disinterest makes this discussion less interesting. Besides, the simple fact that there is somebody else out there should be world-shaking enough. And early on, the paper does put that forward:

"If ETI do exist within the galaxy, then confirmation of their presence would have profound implications for human science, philosophy, religion, and society. This point has been noted repeatedly throughout the literature."

The paper then considers at what level those implications would reach. It's possible, they say, that this discovery may be equivalent to the aforementioned Copernican revolution, when the Earth was first denied its special place in the universe. In such a case, "it would change human thought but not radically alter our geopolitics." Even after heliocentrism became popular and accepted, many people still clung to a special place for the Earth and humanity, embodied either in their rejection of evolution by natural selection or by their assertion of other modes of superiority, like nationalism, racism, or religious bigotry. It's with these worldviews that problems may arise after ETI detection:

"The groups whose worldviews would be challenged could respond in harmful ways if they feel threatened, nullified, or otherwise worsened by the discovery or the intent to reply. While we hope that detection would unify humanity towards positive outcomes, the opposite result remains entirely possible."

However, the authors argue, detection should not be the world-shattering event it could be for those worldviews, in part because their world would already be shattered:

There's plenty more to read in this paper (what an ETI could be like, how contact could be harmful, the possibility that the Earth is a zoo and protected from contact by a real-life Prime Directive), but I think that's the most important assertion. Any worldview that considers itself endangered by the knowledge of ETI is invalid even before we find it. Sure, we may not know if there's anyone out there for a long time, but if they are there, whether we find them or not doesn't change how wrong those worldviews are; it only changes our knowledge of how wrong they are.

The detection of intelligent life beyond ourselves should force us, once again, to be humble in our existence. We would not be so special, in the sense that we would not be the only organisms that made it to sentience. It would compel all of us to consider the probability that we are not exalted beings, or at least not exalted above everything else. It would force us to consider the benefits of finding ourselves a single point in a large network of existence, our fate tied to our planet's conditions and our ability to get along with each other. Whoever that "each other" is.

Finally, to get back to Contact: The book is phenomenally better than the movie, but the movie is far from being total crap. Another of my favorite parts, besides the testimony clip I embedded earlier, is the first scene. It starts just above Earth and zooms out to see and hear... Well, it's an aural and visual treat that reminds us of our small, yet special, place:

And this, my friends, has blown my mind.

(If you want to read more, click the button for some observations that I couldn't fit in.)

I don't doubt that the people have a right to know, especially if taxpayer money would be used to hide whatever proof there may be. (I'm pretty convinced there isn't any proof, mainly because that's a secret too good to keep under wraps. Plus, there are many simpler explanations for what people see as UFOs. But I digress.) The real zinger here is the second sentence from that petition: "The people can handle the truth."

Once we started discovering (or, more correctly, rediscovering) each other, our interactions weren't always friendly. Europeans, thanks to their superior technology and immunity from disease, would conquer vast swaths of Native American territory. Europeans and Asians would conquer Polynesian and African territories in much the same way. Each wave of conquest would be fueled either by a sense that the conquering civilization has the right to the land (Pizarro said to his men before his conquest of the Inca, "There lies Peru with its riches; here, Panama and its poverty. Choose, each man, what best becomes a brave Castilian."), or by a sense that the conquered civilization doesn't deserve it (Juan Ginés de Sepúlveda said, "It will always be just and in conformity with natural law that such people submit to the rule of more cultured and humane princes' and nations.").

These conquests, violent and subjugating, happened between people who shared almost everything. Outside of migration patterns, cultural priorities, and appearance changes, everything else was the same: same common ancestors in the great apes, same hereditary mechanism in DNA, same reliance on carbon, oxygen, nitrogen, hydrogen, sulfur, and phosphorus. The biggest reason for these conquests, in my opinion, was an inability to comprehend scale. Each group knew its own group; all the history and interconnectedness of the human species, however, was unknown, and I'd argue that if they knew how small and relatively unimportant their differences were, things might have gone differently. Maybe not smoothly, but probably less destructively.

If we react this way to beings who, in the grand scheme of things, are our brothers and sisters, how would we react to the discovery (based on independently established and verified evidence, mind you) of another intelligent species, genuinely distinct from our own? Could the people handle the truth?

Stephen Hawking, in a 2010 Discovery Channel piece reported on by the BBC, said, "If aliens visit us, the outcome would be much as when Columbus landed in America, which didn't turn out well for the Native Americans. ... We only have to look at ourselves to see how intelligent life might develop into something we wouldn't want to meet." Fair enough. I'd argue that this applies both ways, and that if the alien civilization we find could be considered "inferior" to us (and, of course, reachable), we might be tempted to see their planet as something we should call our own, a la Avatar.

Of course, that assumption relies on our unwillingness to learn from past experience. I have enough faith in humanity that we wouldn't do that. I hope I'm right.