Photos from the backboard

You know the photos Sports Illustrated publishes all the time, the ones of NBA players laying up and college players trying to grab a rebound (photo 37)? They get it because they have a camera clamped right behind the backboard, and they fire it with a remote trigger, often a Pocket Wizard.


Well, I now have all of that and more: a Super Clamp, Pocket Wizards with the right cord, a sturdy camera and lens, and a high school willing to indulge an alum's fancy. The photos I got aren't perfect (I also need a Magic Arm to put the camera wherever I want, instead of sitting on a crossbeam, and a flash trigger wouldn't hurt), but they're something. Here are the two best shots I got last night during Cardinal Ritter's game against Monrovia: 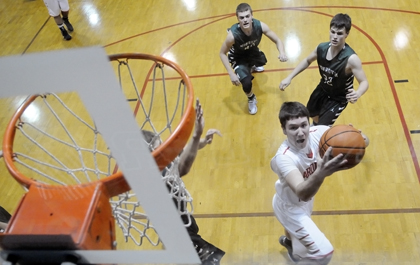 If you look closely, you'll see reflections from the referee and the mat on the stage behind the backboard. You'll also notice the big white box blocking much of the basket, and the imperfect location compared to the SI photos. (You'll not notice, of course, the 188 photos I took that did not work out.) But no matter. Once I get all this done perfectly, I'll have more photos to put up in a proper photo-blog entry. For now, it feels pretty cool knowing I can do it.