Time-lapse during the Orionids meteor shower

Halley's Comet, probably the most famous comet due to its historical significance and 75-year period (it returns in 2061), leaves two presents for us to enjoy while it's gone: meteor showers. The debris the comet leaves in its wake every time it passes by the Sun lingers at two points in Earth's orbit, and when the Earth passes through that debris, it burns through the atmosphere in the so-called shooting stars we know so well. The most visible meteor shower, the Perseids of Comet Swift-Tuttle, falls in mid-August, but Halley's two showers (Eta Aquariids and Orionids) aren't too shabby, either, and the latter falls in October.


The Orionids' peak occurred between Saturday night and Sunday morning, with a projected rate of 25 meteors per hour. I've only properly watched one meteor shower before (the Perseids in 2007), so I figured Saturday was a good day to correct that. With my camera, I drove to the closest dark sky I could find: an empty gravel road off of IN-75 (location approximate). I then took successive 20-second exposures of the eastern sky with two goals: snap a picture of a meteor, and make a time-lapse animation of Orion rising up and to the south.

I saw three meteors with the naked eye (two more than when I watched the Perseids five years ago), but none of them were in the camera's field of view. I did stay out for over an hour, so the time-lapse part worked... kinda. I forgot how powerful early-morning dew could be, and water slowly condensed onto my lens until, by 2 a.m., the camera captured no stars. That's something to remember the next time I try this (for I will try it again!), especially when I'm done building a barn door tracker (specifically, a double-arm tracker).

One more thing: With such a vast expanse of dark sky above me, with all those points of light and the Milky Way arrayed light-years away, I had the feeling, once again, that the whole thing was way too big and would fall down upon me. Only after I was out there for 15 minutes, looking intently on one part of the sky, did I get over that feeling. And in all that time, while a Radiolab podcast played on my phone, I thought, once again, of xkcd:

From xkcd on Nov. 9, 2011. Seriously, this freaks me out. I'm sure I'll get over it some day. Randall Munroe
An hour and four minutes passes in eight seconds. Almost half of that time got increasingly foggy. Alex Farris 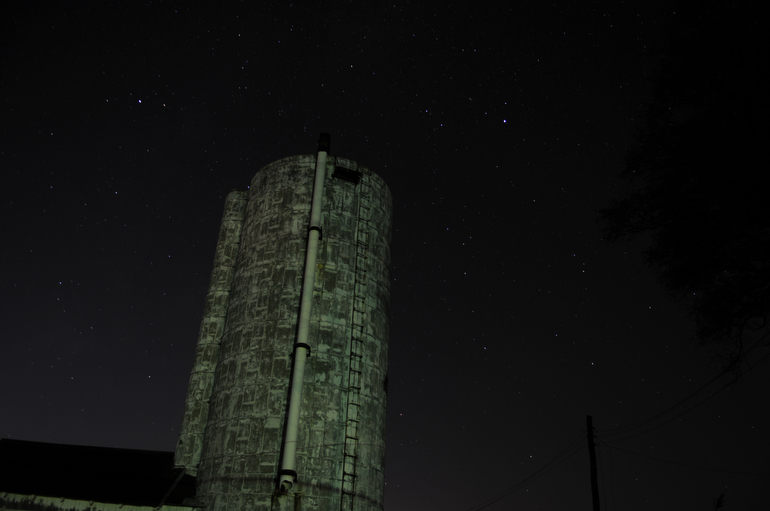 The abandoned silo makes it Indiana. Once I finish my barn door tracker, I can leave the shutter open for up to 30 minutes as the camera follows the stars. That way, I could capture the Milky Way, far-off galaxies, and about 32,893 times more stars. Alex Farris