While working at the Indiana Daily Student, I sometimes had the fantastic fortune of getting photos published on a page designed by Larry Buchanan. This guy, in my class of 2011 at IU but who started working for the IDS and IU Student Media before I did, is a fantastic designer and a good person. He's currently an unpaid visual columnist for McSweeney's, the result of an honorable-mention award in the site's recent columnist contest. Before he reached the first rung of The Ladder of Success, however, he warmed the hearts of IDS photographers with how well he treated our photos on his pages. Every good photo on one of his designs found itself covering as much paper as possible, and even if he had to crop a picture, he would do it well and seek the photo editor's approval. When I eventually work full-time for a newspaper or magazine, I hope I work with a designer like Larry. 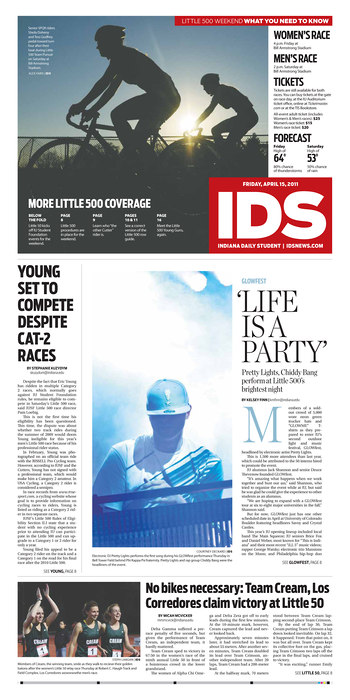 The two other fortunate photographers with work on the page are Courtney Deckard (DJ Pretty Lights) and Steph Langan (runners).

(I don't want to lead you to believe, however, that I think Larry is perfect. He is human, you know. Proof: If you look at the full PDF of the page, you'll see that he spelled my name wrong. I won't hold it against him.)