Let's not get too excited.

A 12-0 record hasn't happened to IU men's basketball since the 1975-76 team that earned a perfect season. There are so many reasons to be excited about this year's team and expect them to keep being awesome: Cody Zeller, Victor Oladipo, the fan base, beating Kentucy, etc. (I'll happily admit to watching Christian Watford's shot called by Don Fischer at least 10 times.)


But there are also reasons to be worried, the main one being last year. Although IU started the season 6-0 and compiled an 11-4 nonconference record, their subsequent 3-15 Big Ten record and winless road record didn't live up to expectations. So, here are some photos of success and failure from last season, when I was one of the IDS beat photographers for men's basketball. It's not meant to depress you (there are happy moments in here), but rather to remind you not to expect too much. 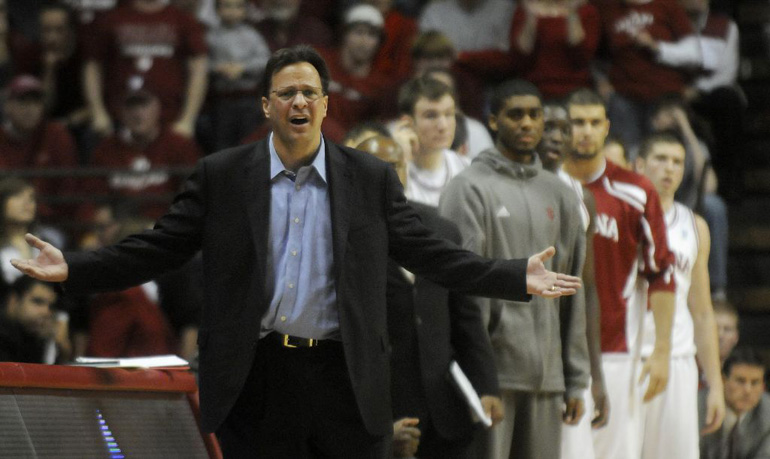 IU head basketball coach Tom Crean complains about a call during his team's 93-81 loss to Northwestern on Jan. 9, 2011, at Assembly Hall in Bloomington, Ind. The loss was IU's fourth straight in Big Ten play before getting its first conference win six days later against Michigan. Alex Farris 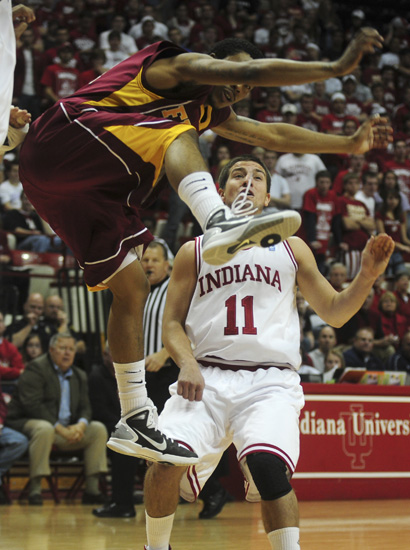 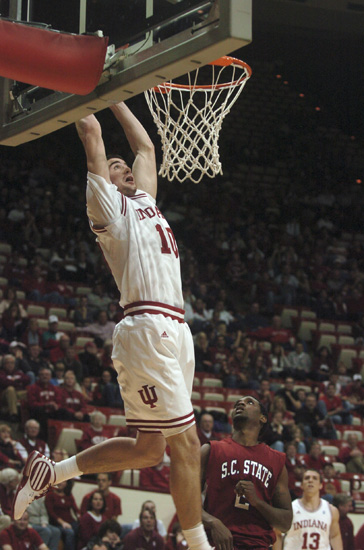 Will Sheehey makes one of his famous dunks during IU's 102-60 win over South Carolina State on Dec. 19, 2010, at Assembly Hall. Alex Farris 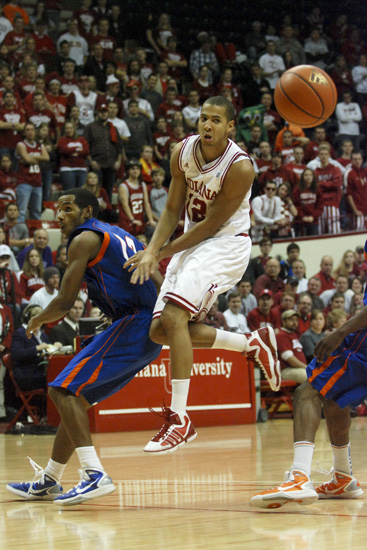 IU's Verdell Jones III makes a pass during IU's 79-57 victory over Savannah State on Dec. 4, 2011, at Assembly Hall. The win, following an 88-76 loss to Boston College in the ACC/Big Ten Challenge, brought the team's record to 7-1. Alex Farris 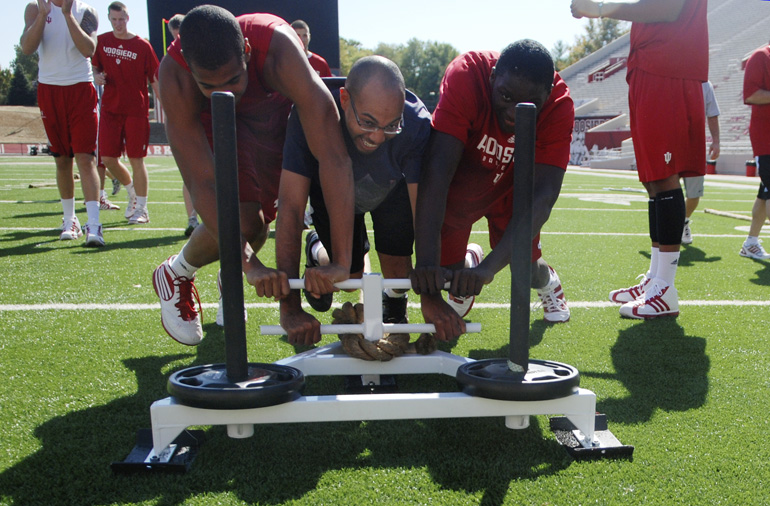 Verdell Jones and Victor Oladipo help The Journal-Gazette's LaMond Pope push a weight to the end zone during the Crean and Crimson Media Challenge on Oct. 6, 2010, in Memorial Stadium. IU reporters were invited to do similar workouts as the basketball team in a contest led by Crean and strength & conditioning coach Je'Ney Jackson. Alex Farris 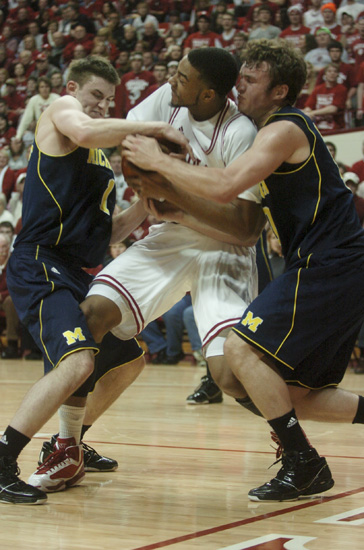 IU's Christian Watford wrestles for control of the ball during the team's 80-61 victory over Michigan on Jan. 15, 2011, at Assembly Hall. The win was IU's first of three Big Ten victories, all at home. Alex Farris 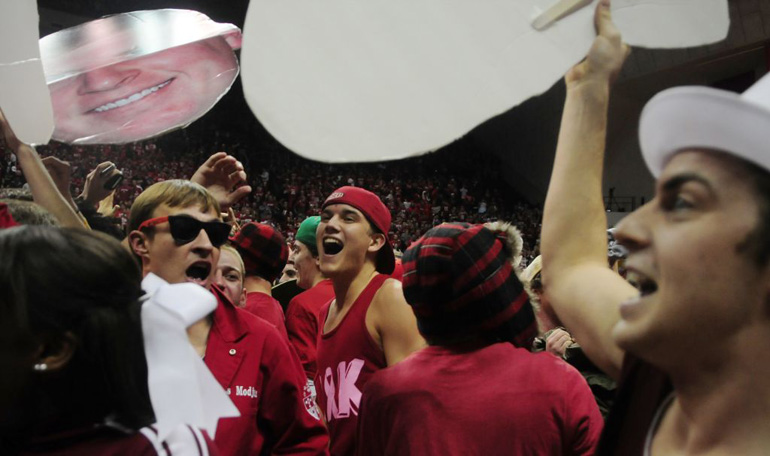 IU students storm the court after a 52-49 victory over No. 20-ranked Illinois on Jan. 27, 2011, at Assembly Hall in Bloomington. The win was Crean's first over a ranked opponent at IU. Alex Farris 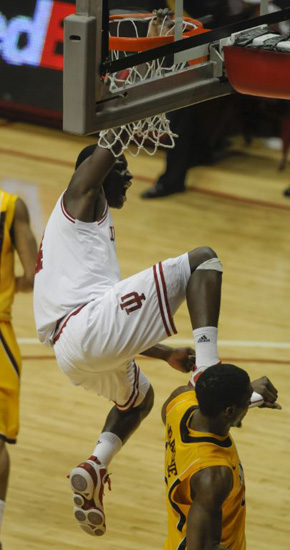 Victor Oladipo dunks over Minnesota's Trevor Mbakwe during IU's 60-57 win over the Golden Gophers, their final victory of the season, on Feb. 2, 2011, at Assembly Hall. Alex Farris 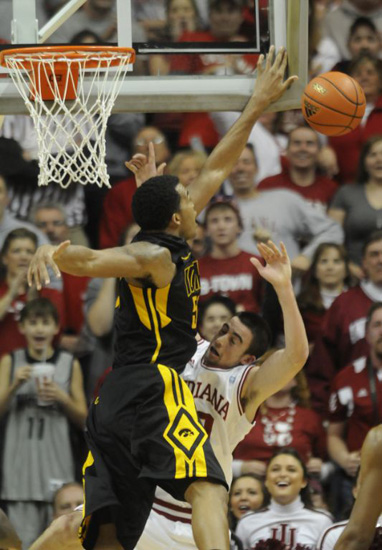 Iowa's Jarryd Cole blocks an attempted dunk by Will Sheehey during IU's 64-63 loss to Iowa on Feb. 5, 2011, at Assembly Hall. Alex Farris 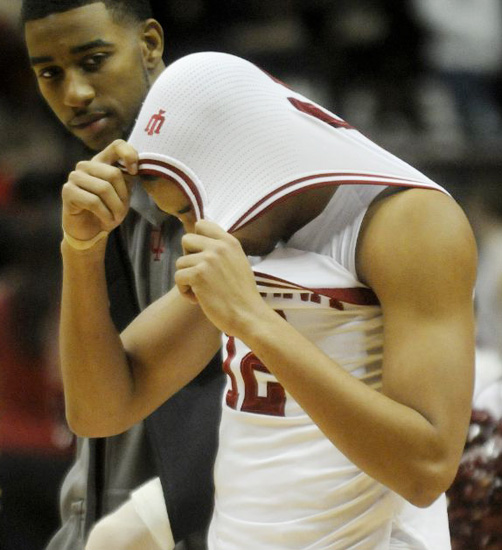 Verdell Jones hides underneath his jersey after missing the shot that would have given IU a victory over Iowa. Alex Farris 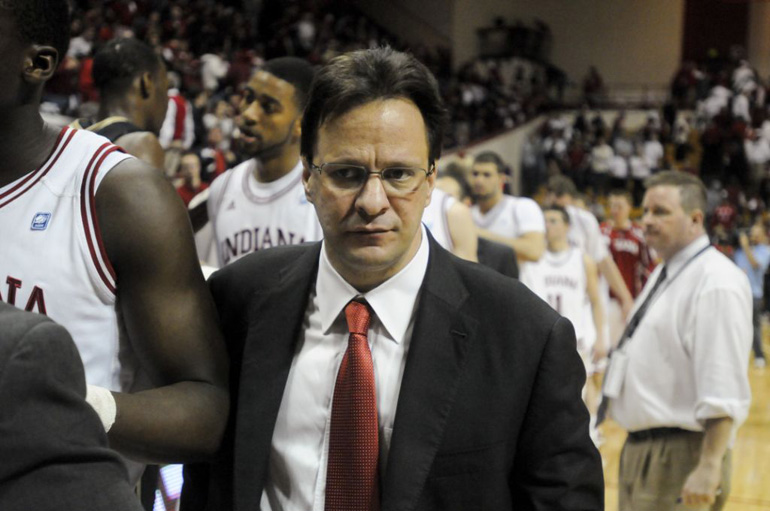 Tom Crean walks off the court with his players after the team's 72-61 loss to Purdue on Feb. 23 at Assembly Hall. IU also lost to the Boilermakers in West Lafayette, 67-53. Alex Farris 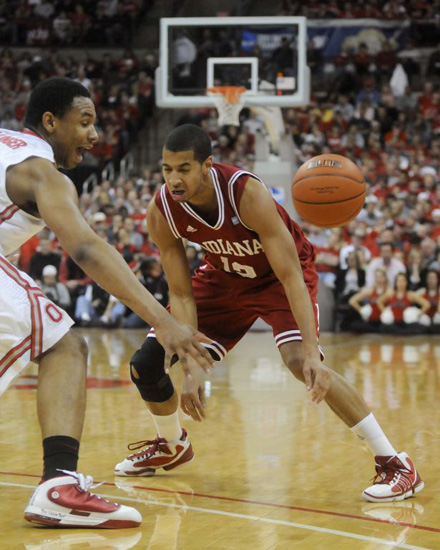 Verdell Jones dribbles off the foot of Ohio State's Jared Sullinger during an 82-61 loss to the Buckeyes on Feb. 27, 2011, at Value City Arena in Columbus, Ohio. Alex Farris 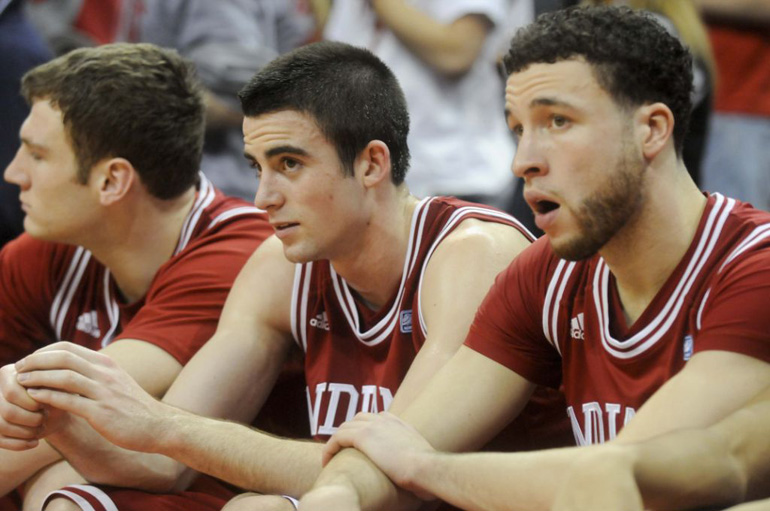 Will Sheehey watches the end of IU's loss to OSU on the bench with Jeremiah Rivers. Alex Farris 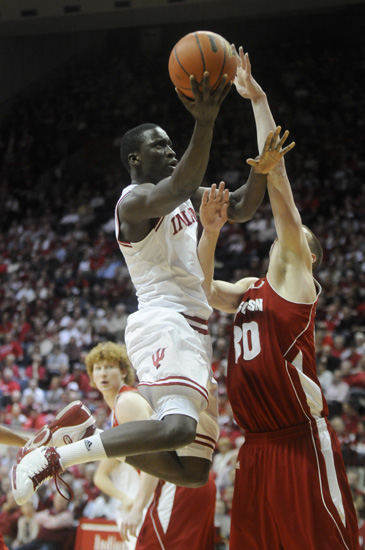 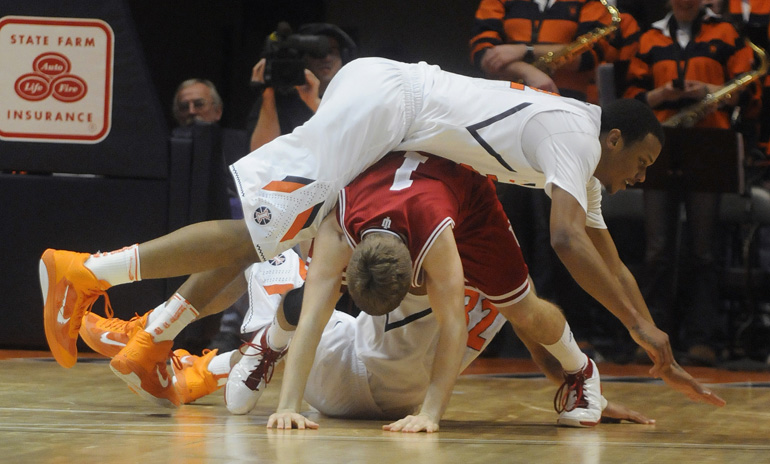 IU's Jordan Hulls balances Illinois' Jereme Richmond on his back during a loose ball in IU's 72-48 loss to the Fighting Illini on Mar. 5, 2011, at Assembly Hall in Champaign, Ill. After beating Illinois at home on Jan. 27, IU's loss in Champaign brought the team's true road record to 0-11. Coupled with two losses in the IBN Las Vegas Classic and a first-round loss in the Big Ten Tournament, it was IU's first winless road record since the 1900-1901 season. Alex Farris