Even though I've graduated from IU, the time-honored tradition of file photos has allowed some of my work to keep showing up in the Indiana Daily Student. I often had to pull files from Brandon Foltz, James Brosher, Yossi May, and Ashley Wilkerson when I was photo editor, so I suppose the current editors are returning the favor.


The most prominent blast from the past, though, was on last Friday's P1, where the centerpiece was a story on the changing start times of the Little Fifty and women's Little 500. My photo of champion Teter cyclist Caitlin Van Kooten served as the main art here: 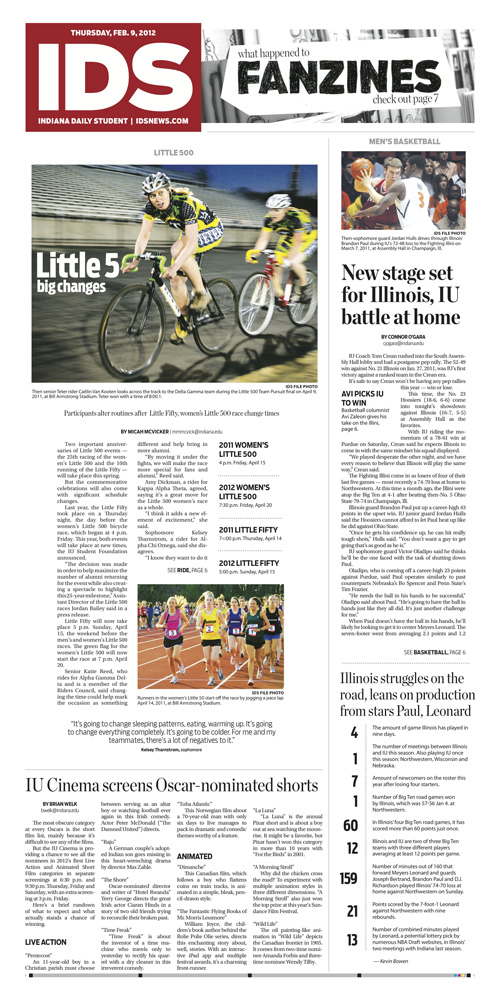 Notice another Farris file photo (Illinois basketball) to the right.

The slight blur in the right of the photo didn't get there on purpose. It was dark at the end of Team Pursuit (a Little 500 Spring Series event; more photos here), so I needed the shutter as slow as possible without making a mess of the sports action as I followed it. It worked, if only on accident, to convey the "pursuit" part of Team Pursuit, in tandem with Van Kooten's glare to the other side of the track at the competing team.

The motion blur made me think of other places I've seen it and how it got into my work. Of course, the aforementioned Brosher and May have done it well, as has every photojournalist's idol and example, Henri Cartier-Bresson, but I do have some experience with it. 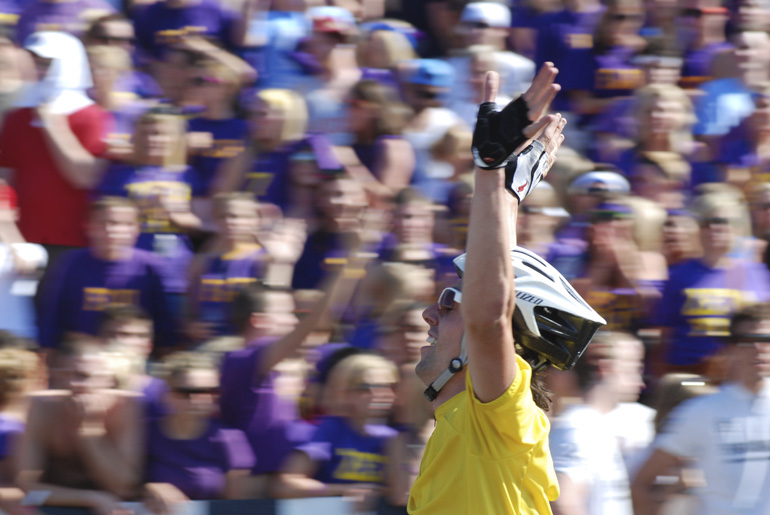 (130mm, f/2.8, 1/160s) The Cutters' Eric Young crosses the finish line during a victory lap after winning the Little 500 bicycle race Apr. 25, 2009, at Indiana University in Bloomington, Ind. The Cutters won the event for the third year in a row, overcoming a crash and a late penalty. (Alex Farris | Arbutus)

I won my first photo award (CSPA, first place, sports action black & white photo) with this picture. It's of the Cutters' Eric Young on his victory lap after winning the 2009 Little 500. I was using an IDS 70-200 lens at 130mm, f/2.8, and a shutter speed of 1/160s. I didn't mean for there to be motion blur, but it combined with Young's satisfied expression and the dejection of the fans in the background to make something good. Yay, accidents!

Surprisingly, I rarely used sports motion blur outside of cycling. I always was conscious of the premium put on sharpness in other sports photos (football, basketball, baseball), so I never tried what Brosher did above. So, here's another cycling blur from the same night as the one in the paper: 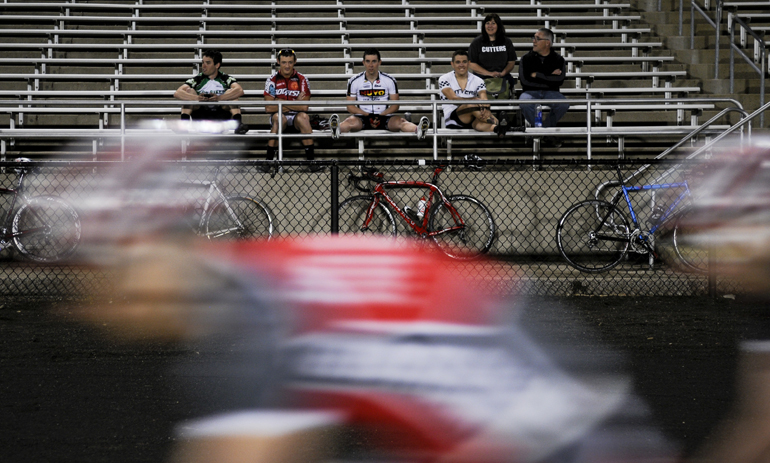 (55mm, f/2.8, 1/80s) Riders from the Cutters watch Delta Tau Delta race down the front straightaway during the Little 500 Team Pursuit final on Apr. 22, 2011. The Cutters missed the final heat by a recorded tenth of a second. (Alex Farris | Indiana Daily Student)

This time, I didn't follow the moving action so much as I stayed on the static inaction while the motion blurred past. The Delta Tau Delta coach liked this photo so much he wanted it hung in the team's practice room as inspiration. (That's like someone cutting out your photo and putting it on the refrigerator: sometimes that's more rewarding than an award.)

And here's another blurry cycling photo, this time from Quals. Rabi Abonour thought the sharp bike label made it seem more like an advertising photo than neutral reporting, and that's a very fair point. Journalistic or not, though, we both agreed that it works. 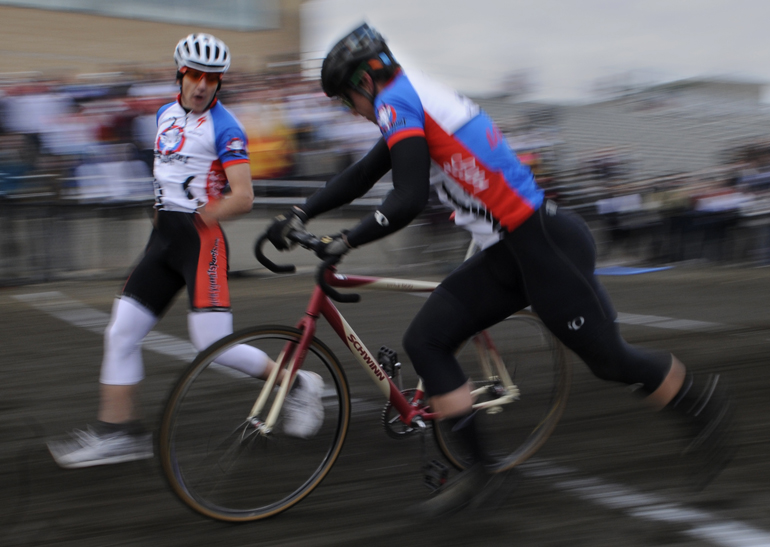 Switching back to "stayed on the static inaction," I tried out some track & field blur during an IU indoor meet in which my brother from Wabash College competed. The banked turns at the Robert C. Haugh indoor track made it very easy to look toward the middle and capture runners' shoes racing by. 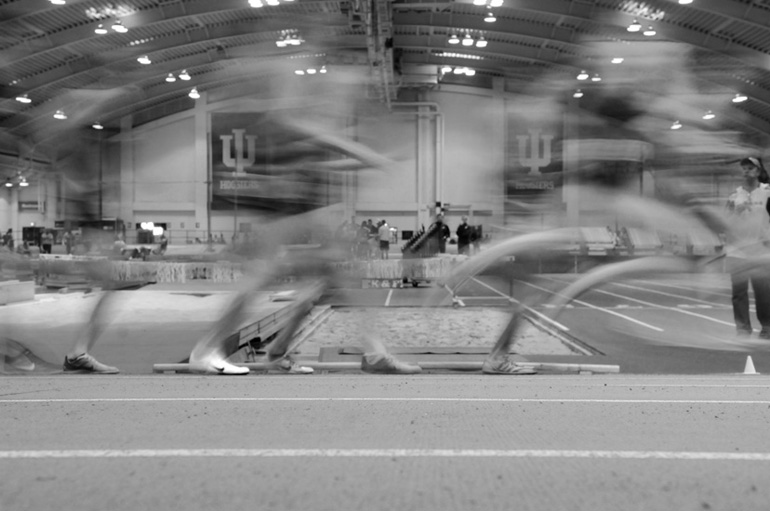 I even tried a bit during the hurricane that was the IU basketball team's win over No. 1 Kentucky. This one was purposefully set to 1/4s so I could get enough detail to show Lacey Nixon's emotion but enough movement to show how everyone was jumping around: 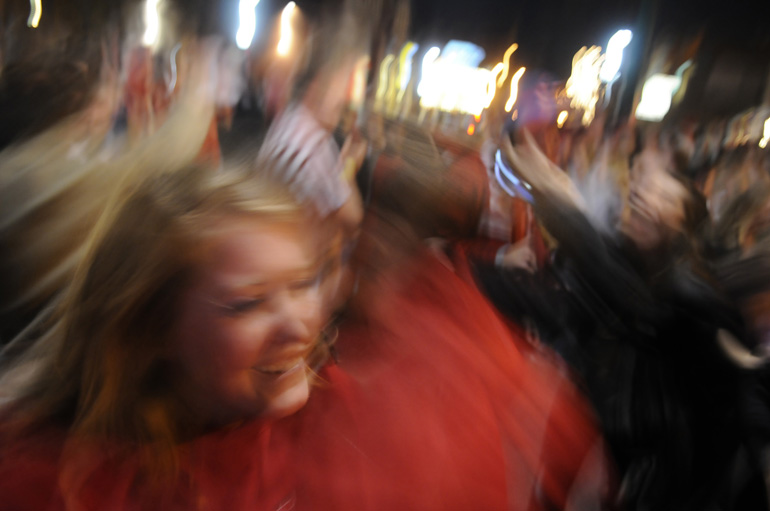 I took a lot of other photos, to be sure, but even if they showed people frozen in the air and in the middle of banging on a car, I never felt that they truly showed movement. Thus, in the above photo I tried to correct that.

I get the feeling that motion blur is sadly underused, by both me and other people. (Of course, a quick Google search for "motion blur photography" might dispell that notion.) A crisp photo does provide the reader with something definite for the eye and a single point in time on which to focus. When the single moment doesn't tell the whole story, however, capturing the blur of the preceding milliseconds helps to flesh it out and tell the story in three dimensions: height, width and time. (Plus, if you used selective focus, you've got the fourth dimenson of depth.)

Thus ends this first hard drive dumpster dive. I want to do more, so the next one, about the closest thing I have to a photography fetish (internal frames), should be up by the middle of next week.