True Lit candles accompany the singing of the Notre Dame alma mater at the end of Mass. During the homily, students read the names of every Notre Dame graduate who died at the World Trade Center, the Pentagon and in Shanksville, Pa., as well as those of the founding order, the Congregation of the Holy Cross. Alex Farris
9/11/11 in South Bend | Alex Farris Photo Blog
Home
Previous
Archive
TAGS
News
Extreme POV

My dad and I were in South Bend, Ind., for Sept. 11 weekend. Dad was in a bike ride to support hospice care in the area (from which my grandmother benefited before she died 2.5 years ago), so I decided to go on assignment, if only for myself. I found a listing of 9/11 events on the South Bend Tribune, and I went to three of those events: a dedication ceremony in a downtown park, a blood drive at a fire station and a memorial Mass at Notre Dame. For the Mass, a Notre Dame photographer allowed me to take photos from the top of the stadium, where I could see Touchdown Jesus and all the students assembled in front of it. The view provided a poignant ending to a day that, ten years on, still pulls me back to that day in seventh grade when my science homework suddenly didn't seem that important. 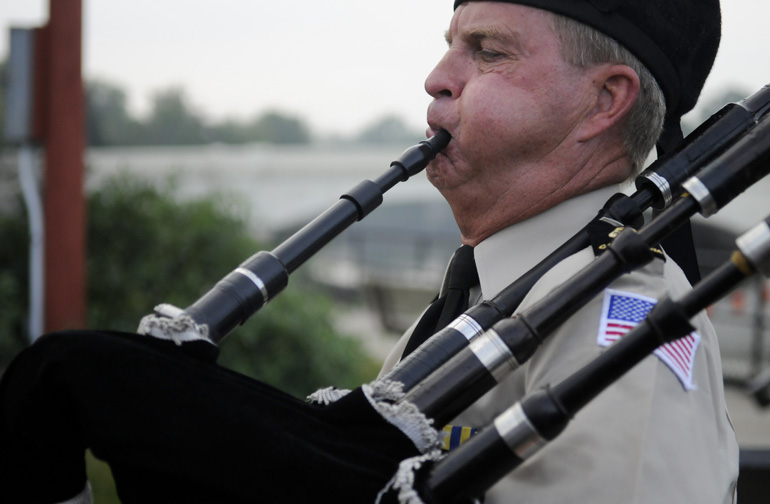 A South Bend, Ind., bagpiper plays after a moment of silence to mark the first plane hitting the World Trade Center at 8:46 a.m. during a ceremony Sept. 11, 2011, in Seitz Park in South Bend. Mayor Stephen Luecke, U.S. Rep. Joe Donnelly (D-2nd) and police and fire chiefs spoke during the ceremony. 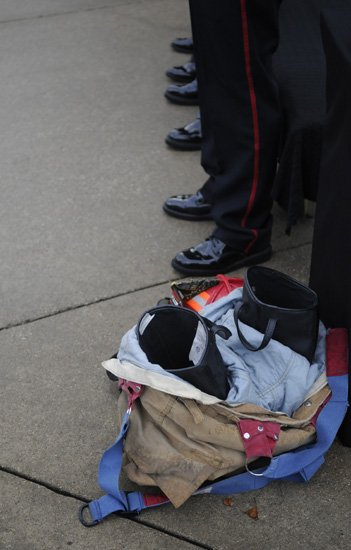 South Bend firefighters stand next to an empty fireman's suit near the end of the ceremony. The ceremony ended with a ringing of the firehouse bell and a 21-gun salute. 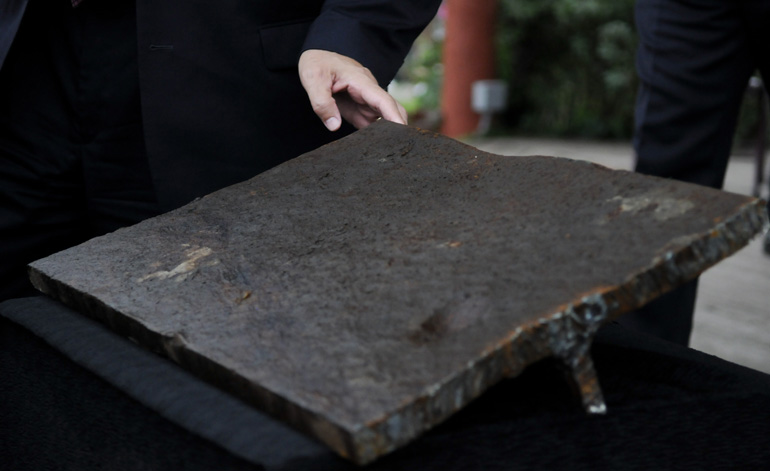 south Bend mayor Steve Luecke touches a piece of the World Trade Center after the ceremony. South Bend firefighters went to New York City on Wednesday, Sept. 7, to pick up the 198-lb. piece from one of the towers. 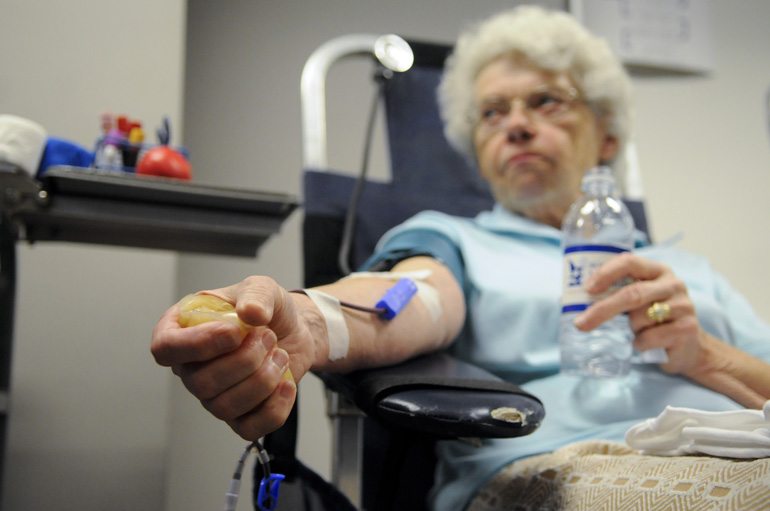 Joan Osborne donates blood during a blood drive at the fire station in honor of two South Bend natives lost in the Sept. 11 attacks. Katie McCloskey, 25, was working in the 97th floor of the North Tower, and Kathy Nicosia was a flight attendant on American Airlines Flight 11 that hit the same tower. 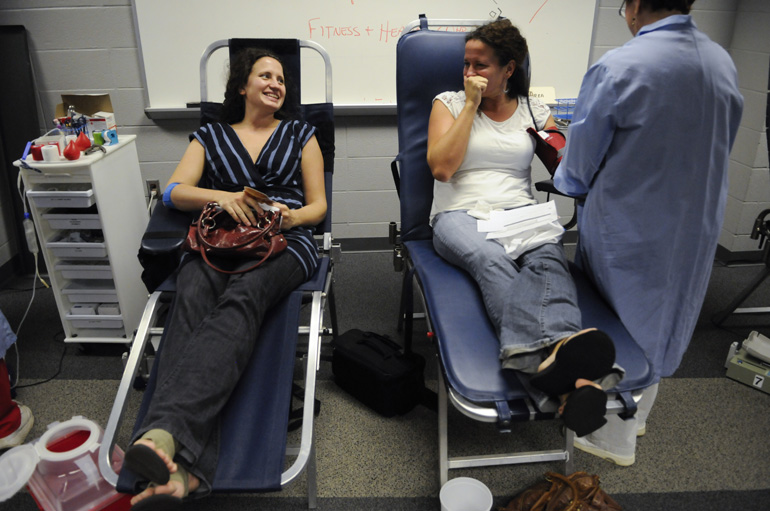 Greta Bradley looks as her sister Lindsay grimaces after giving blood during the blood drive. It was Lindsay's first time giving blood. 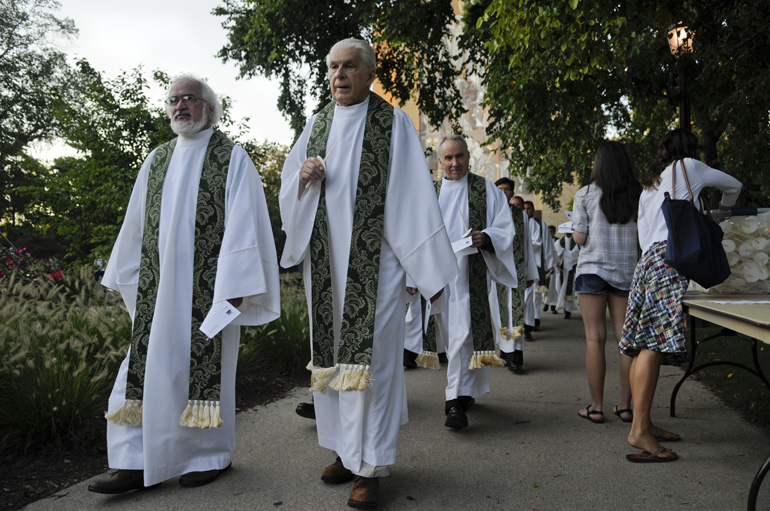 Concelebrant priests walk toward their seats before a memorial Mass at 7:30 p.m. in the Hesburgh Library Mall at the University of Notre Dame. Normal evening services at individual dorms were cancelled so that all students could attend the service. 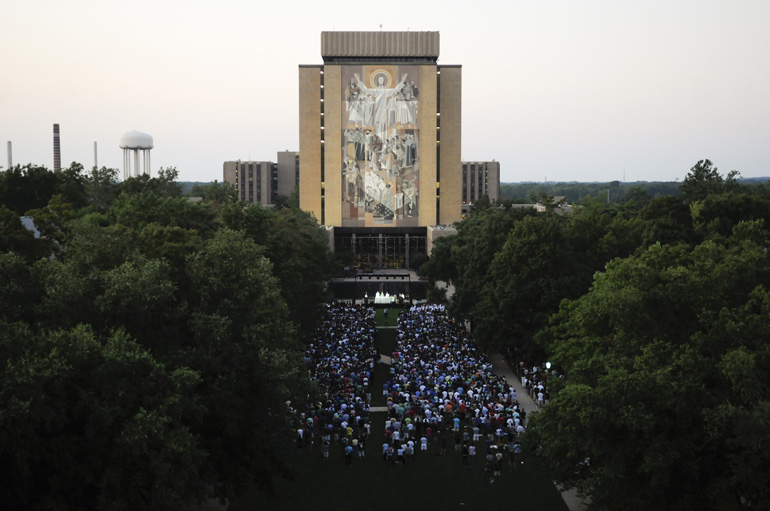 Over 1,000 students, faculty and friends stand during the Liturgy of the Eucharist halfway through Mass. Former Notre Dame president Rev. Edward A. Malloy, who celebrated the Mass held immediately after the attacks 10 years ago, preached at the Mass on Sunday. 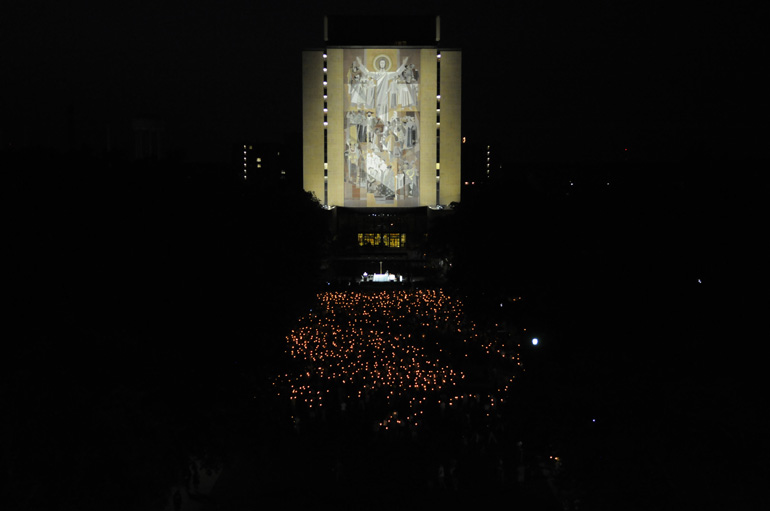 Lit candles accompany the singing of the Notre Dame alma mater at the end of Mass. After the homily, students read the names of every Notre Dame graduate who died at the World Trade Center, the Pentagon and in Shanksville, Pa., as well as those of the founding order, the Congregation of the Holy Cross. 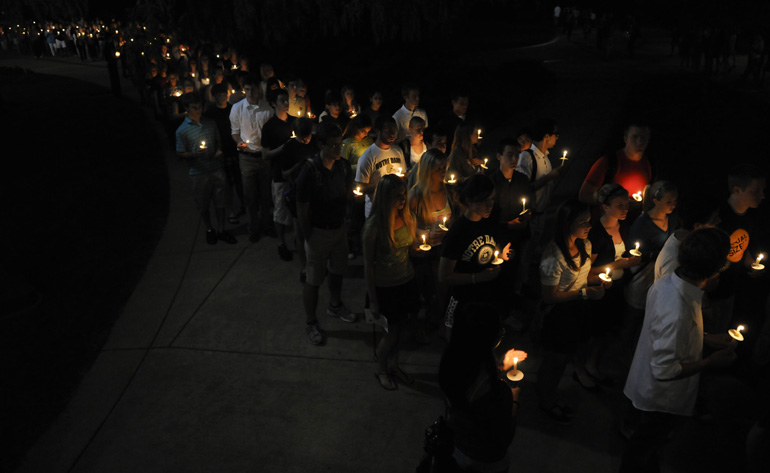 Students line up as they walk silently toward the Grotto after the memorial Mass.

Students kneel and pray in front of the Grotto for silent prayer after the memorial Mass. Most of the more than 1,000 students walked through the Grotto and offered prayers on the 10th anniversary of the Sept. 11 attacks.