For how much I love Little 500, I've gone to its parent event, the Indy 500, about as often. From 2006 to 2008 I joined my dad and family friends at seats in Turn 1 at the Indianapolis Motor Speedway. In that first year, I saw Sam Hornish Jr. beat Marco Andretti (just barely) to the finish line, a finish almost as thrilling as last year's when Dan Wheldon (God rest his soul) passed rookie J.R. Hildebrand after Hildebrand hit the wall in the final turn. I was hooked on the race before then, though; my parents threw a 500 party with 60-odd people the day before the race, and in high school we got Carburetion Day off every year because it was so close to the track. Every month of May, we knew school was almost out by the sound of the roaring engines at 4790 West 16th Street.


The Indianapolis Star gave me another photo assignment this weekend, this time of the 1st Rev Your Engines Concert on Monument Circle. It's the first event this year of the long build-up to The Greatest Spectacle in Racing. The announcer before the show said May is getting so big that they had to push it into April, and I'm okay with that.

Check out more photos of Plain White T's and The Romantics in the Star's gallery. And if you're in the area, you should find a copy of today's paper. Three of the photos made the front of the Metro & State section. 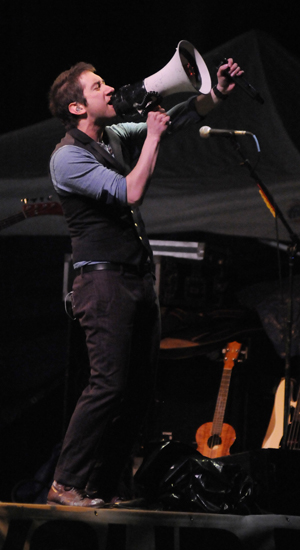 Tom Higgenson of Plain White T's sings into a megaphone during the 500 Festival Rev Your Engines Concert on Monument Circle, Saturday, Apr. 28, 2012. (Alex Farris / For The Star)